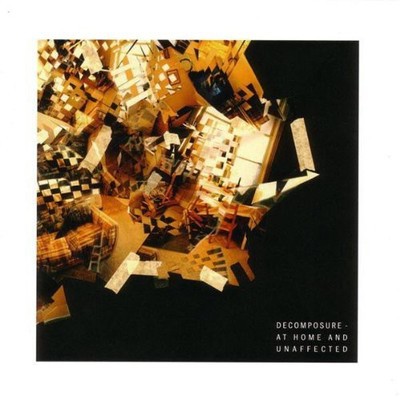 To get a sense of what 'At Home and Unaffected' is, it might be helpful to picture an onion. An onion is a unique structural form: while at first encased in a brittle, desiccated husk, when peeled it uncovers an almost alien anatomy, a cleanly contained object ordered with skeletal precision. When you dig further into it, you find another layer below constructed as carefully as the level above, and below that even more levels clench tighter and tighter around a compact central core. It's as if each of the newly-revealed iterations are in themselves their own onion, but all are part of a greater whole. Like the onion, Decomposure's sophomore LP, 'At Home and Unaffected' shares the same meticulous layering and structure. Expanding on the foundations set by 2004's 'Taking Things Apart', he has focused his energy into a tight, cohesive model that stacks idea on idea to a dizzying end. Gathering and sorting sound recorded almost entirely from his apartment, this 22-year old Canadian musician has carefully assembled an indefinable hybrid of styles that spans breakcore, pop, glitch, acoustic, spoken word, ambient, and minute traces of all other forms of recorded sound. While it is kind of sort of mostly electronic music, almost none of the telltale signs are there - there are no synth pads nor canned beats nor familiar samples in sight. Instead, mixing fractal organic beats and smart melodies with a unique combination of spontaneity and order, he assembles a rich set of textures and sounds that reveal more with each listen. And even as he experiments with the free-form and challenges mainstream conventions, the album manages to remain oddly open and accessible throughout. 'At Home and Unaffected' is not only about the sounds the album was created from, but it also attempts to understand and cope with the extreme apathy of the new Bush era, where self-indulgence and simplified perspectives seem to be everywhere. From bland pop culture and commercialism to lazy partisanship to religious and personal hypocrisy, Decomposure digs through the wreckage of the new millennium for answers. Thankfully eschewing the dire arty pessimism that typically accompanies this type of work, he instead approaches it all with honesty, openness, and a cynical but good-natured sense of humor (as his infamous extensive liner notes evidence). It may not be as easy to decode as the latest Ja Rule song, but the rewards of peeling the layers off 'At Home and Unaffected' are well worth it. It may even make you cry. Well, probably not. But that would have been a great payoff to that whole onion thing.

Here's what you say about
Decomposure - At Home & Unaffected.