Lumbar Five - Ask Your Doctor If It's Right for You 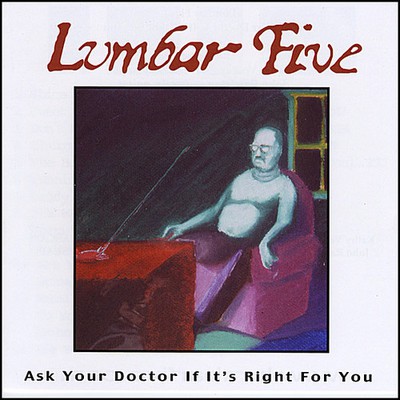 It begins with Kathy Veazey, a powerful, soulful vocalist who writes interesting, catchy songs, and who also plays a mean keyboard, guitar, and slide. Add singer and songwriter John Rawlston, whose innovative guitar playing complements the wide emotional range of the music. Blend in an eclectic group of veteran musicians: founding member Nick Honerkamp on bass and vocals, Kofi Mawuko and his West African percussion magic, and Jo Whitaker, a rock-solid drummer with jazz and progressive rock roots. Their band is called Lumbar Five, playing concerts, clubs and festivals since 2001 in the Chattanooga area and around the region. Kathy & John also play semi-acoustic shows, sometimes adding Nick and/or Kofi. The first Lumbar Five CD, titled Ask Your Doctor If It's Right For You, was released in the fall of 2004. Recorded in Nashville at the Switchyard with the help of Michael St. Leon, the album features 14 original songs that stake out the band's own particular vision of the musical landscape. Ask Your Doctor If It's Right for you was recorded before Kofi and Jo joined the band, but features the great percussion work of Matt Turnure. Michael's comfortable studio and patient hand at the controls provided the perfect setting for the band to record their first album, and a great collection of songs and performances are the result. The Lumbar Five, with Kofi and Jo, has returned to their favorite studio and expect to release their new CD, Second Opinion, in 2008. Find our MySpace page to hear preview tracks. The Lumbar Five evades easy classification, but their music can be described, perhaps incompletely, as soulful, rootsy rock and roll. Kathy's voice is a force of nature, the type of force that can roar like a hurricane or soothe like a cool summer breeze. John's guitar is the perfect foil for that expressive vocal instrument, bending and swooping in and around the music with it's own distinctive voice. The two play off of each other instinctively, constantly bringing something new to the music. The mixture of talents in their band brings a depth to the music and a connection with their audiences. New songs appear often in Lumbar Five setlists as the spark of creativity continues to burn brightly. A Lumbar Five show can be many things, but the end result is an evening of fun. The music makes you want to move your body - be careful not to let that backbone slip - but the songs also make you think and move you on a level deeper than the physical. And still put a smile on your face.

Here's what you say about
Lumbar Five - Ask Your Doctor If It's Right for You.