Karen Jacobsen - As I Am 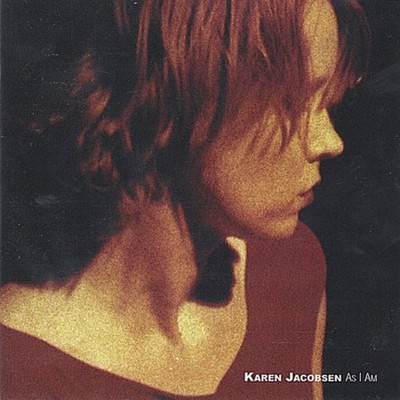 Karen Jacobsen was born to touch people's lives with her music...as legend has it, her Mother took piano lessons while carrying her. Since moving to New York City, Karen has been awarded the Abe Olman Award for Excellence in Songwriting from the Songwriters Hall of Fame, sung the National Anthem at Madison Square Garden for a NY Liberty Basketball Game, and at Fenway Park to a sellout crowd of 34 000 people. Karen's song, 'Supposed To Say' was placed on an episode in Season 2 of the hit WB TV Series 'Dawson's Creek' and is available on her CD release 'As I Am'. Originally from Mackay, a country town near Australia's Great Barrier Reef, Karen performed at a school concert at the age of five and her destiny was set. She started to write songs and learn classical piano when she was eight, but was drawn to songs from musical theatre, and the pure pop of Abba and her childhood idol Olivia Newton-John. Piano examinations, choirs and high school musicals followed, including a stint as Dorothy in The Wiz. Karen was perfectly happy to fill every waking hour with music. After high school, Karen moved a thousand kilometres south to Brisbane where she studied Jazz Voice and Piano at the Queensland Conservatorium of Music, winning the Jazz Prize. Awarded the 'Warana Young Performer Of The Year', Karen was soon performing up to five shows a week while marinating in the classic pop ballads and continuing to write and perform her own songs. She soon relocated to Australia's largest city, Sydney, where her career flourished. An original cast member of the Australian production of the Broadway show 'Buddy, The Buddy Holly Story', Karen also toured with the Jon English show 'Turn The Page' throughout South Australia, Victoria, New South Wales and Queensland. By weaving pop piano with her passionate vocal style, Karen creates a powerful dynamic between herself and her audience. In Sydney she showcased her songs with her own band at The Basement, Harbourside Brasserie, Starfish Club, The Cat and Fiddle, The Sydney Acoustica Movement's Tuesday Night Club, the Iguana Bar, Side On Cafe, Club Acoustica, the Commercial Hotel's Acoustic Lounge and the 3 Weeds. Appearing as one of ten selected Singer/Songwriters, Karen performed at the critically acclaimed Joni Mitchell nights held in Sydney at The Basement in 1999. Karen assisted fellow Singer/Songwriter Rachel Gaudry with the organisation of the sell-out concerts. Gaining national television exposure as a regular performer on 'Good Morning Australia', Karen also appeared on The Midday Show, At Home, Ernie and Denise, Hey Hey It's Saturday (with the cast of The Buddy Holly Story) and was a regular singer and prize presenter on I Do I Do, and has performed her songs in Malaysia and Thailand. With a burning desire to be in a creative community, Karen recently left the shores of her homeland and moved to New York City. She immediately started performing at city clubs such as The Bitter End, Ruby Fruit, The Cutting Room, Makor, The Duplex and has appeared at the New York Songwriters Circle, the Songwriters Hall of Fame New Songwriter Showcase, Chick Singer Night, the Storefront Theatre's New Mondays Showcase, and the Circle of Songs Showcase in Los Angeles. She tours regularly to perform in clubs and colleges throughout the U.S. In July 2002 Karen performed in an all star line up (Jars of Clay, Uncle Kracker, Spyro Gyra, Diana King) at the Mohegan Sun Arena in 'Dare To Dream 2002 - A Concert For Hope.' Held to raise money for the Bert Zeldin Foundation, Karen co-wrote the theme song 'Take Me With You In My Dreams' especially for the event which was televised on NBC TV on August 31st 2002. In May 2000, Karen released her critically acclaimed CD 'As I Am', following in May 2002 with her sophomore collection, 'Being Brave.' Further recognised for her songwriting, Karen was awarded 1st Place in the Singer/Songwriter cateogory of the Dallas Songwriting Contest, was named as a Unisong International Song Contest Finalist, and received awards in the Billboard, John Lennon, USA, Andelle, Austin and UK Songwriting Contests. In May 2004 Karen placed Runner Up in the Kauai Music Festival's Song Contest with her song 'Here In My Heart.' Press Quotes '...simply her playing the piano and singing in that never-seen-a-cigarette-in-her-life voice.' Indie-Music.com '...undeniably earnest and commercially accessible.' Billboard Magazine 'Naked. Just Karen and her piano. If anything else on earth can be so pure, it has yet to be identified. Karen has brought her music to the realm of sublime.' Independent Songwriter Magazine 'I don't usually like girl singers. I love this album. Enough said.' Ear Candy 'Almost every song is confrontational, but you can't help listening because her voice and piano playing are so hypnotically beautiful.' Indie-Music.com 'Her confident set...of ruminations of love gone awry, and mini-anthems touting new beginnings warmed the room.' NorthEast Performer.

Here's what you say about
Karen Jacobsen - As I Am.