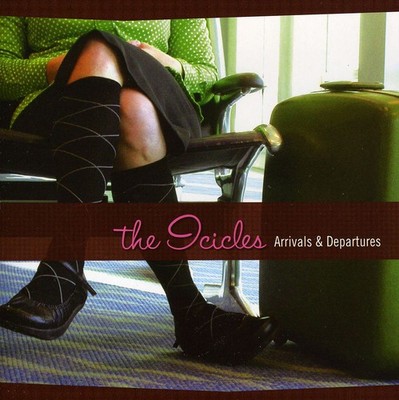 While there are plenty of 'aww...how cute' moments in the back-story of Grand Rapids, Michigan's The Icicles, it would be a mistake to see them as mere DIY indie-poppers. It's true; The Icicles did sell handmade hats and mittens at craft shows to pay for the recording of their debut EP. Joleen, initially too shy to play with Gretchen in the early days, thought she'd be of use to the fledgling group as a seamstress. But, The Icicles needed a keyboardist, and Gretchen liked how Joleen sweetly played 'Blackbird' on the guitar when they first met as students at Grand Valley State University. So, with Joleen in place, the band was born. The group eventually found their way to the stage via the local pop shows brought to Grand Rapids by their future label boss, Drive In/Microindie's Mike Babb, and have stood out (in matching outfits) from day one. They are, at once, a perfect combination of surface and substance. The Icicles share with their contemporaries The Concretes and Camera Obscura (or with past favorites Heavenly, The Softies and Tiger Trap) the ability to create music that recalls the joyous pop sound of the great Sixties' girl groups, at the same time managing to breathe a certain maturity into this oft-visited genre. The tried and true themes of young love and youthful, naive exuberance are present, but tempered with realism and the wistfulness that comes through a grown-up knowledge of conflict and regret. The Icicles recorded their debut EP Pure Sugar at Kingsize Studios in Chicago with Dave Trumfio (OK Go, Billy Bragg, Wilco) at the helm. Although Trumfio is now best known to his major label clients, the group tracked him down because of his work for the band Holiday. Six songs were recorded, mixed and mastered over the course of a frenetic weekend in October 2001, and the resulting EP was released in March 2002. Pure Sugar charted with college radio all over the country, and the Icicles toured extensively through the Midwest USA in support of the release. 2003 saw some personnel changes in The Icicles' line-up. Emily, who, remarkably, had only picked up a bass guitar for the first time three weeks prior to joining, replaced original bassist Daniel. After a short period as an official "girl group," drummer and founding member Korrie Sue left and Greg, veteran of a half-dozen local bands (and secret Icicles admirer), took over for what he thought would be a temporary gig. The new rhythm section provided such a solid backing for Gretchen and Joleen's increasingly intricate harmonies and melodies though that a permanent invitation was quickly offered and accepted. For their debut full length, The Icicles traded a cold Chicago warehouse for the warmth and comfort of Gary Olson's Marlborough Farms. The band had shared bills with Olson's Ladybug Transistor before, but it was his keen ear for layered vocal arrangements that drew them to his Brooklyn home studio in February 2004. Britt Myers, whose talents The Icicles already knew from his work with The Essex Green and Dressy Bessy did mixing and mastering duties. Released in January 2005, A Hundred Patterns went on to draw praise from blogger boys (You Ain't No Picasso) and established media outlets (All Music Guide, Pop Matters) alike. The album also impressed the folks at Motorola, who eventually made The Icicles' 'Sugar Sweet' the theme song of a worldwide ad campaign promoting their new KRZR phone in November 2006. The Icicles embarked on a full US tour in support of A Hundred Patterns from February through April of 2005 and, after a brief resting period back home in Grand Rapids, got the ball rolling for the next release. Rebecca Rodriguez joined The Icicles in early 2006 in time for the group to make their next record. With her distinct playing style, she adds lead guitar lines reminiscent of The Cure and the classic Sarah Records' era, helping the Icicles achieve a fuller, more distinct sound than ever before. After a couple of false starts with other producers, the Icicles finally put down the tracks for their new album in the fall of 2006, and also took time for a short East Coast tour. Local live sound recording legend, Al Mc Avoy recorded the group at his quaint studio. The group again turned to Britt Myers for his mixing prowess, and in January 2007, the band had another record ready for release. The resulting album Arrivals & Departures (due April. 9, 2007), in combination with the Motorola deal, finds the Icicles with a new worldwide audience and an optimistic outlook for the future. The Icicles will be touring in support of Arrivals & Departures on the East Coast in April 2007.

Here's what you say about
The Icicles - Arrivals & Departures.