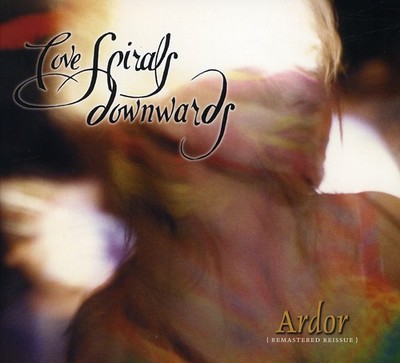 'Like standing under a waterfall: guitar trickles & swirls like a mist around you; as warm cascading female harmonies envelop you, washing you in beauty and melancholy.' 'Ardor' is the 1994 follow-up to Love Spirals Downwards' critically acclaimed Projekt debut, 'Idylls.' For this 2007 reissue band founder, sole musician, and producer, Ryan Lum returned to his master tapes to ensure the highest sound quality possible. Lum has said that he 'always felt the mastering quality was lacking, particularly with 'Ardor'' and that 'compared to the original' the reissue 'sounds much cleaner and sweeter.' Indeed, the depth and clarity of the remastered recordings are remarkably improved with greater definition and more sparkle. And sparkle is an important ingredient in this sophomore offering which features the signature swirling guitars, minimal moody bass lines, and slow paced tempos of the era's Shoegazer movement. Dreamy and romantic sounding, 'Ardor' is rich in atmosphere with lush layers of ethereal guitar textures, ebow guitar leads, jangly acoustic guitars, and the occasional spacey synth line. Atop this bed of sonic wizardly lies the crystalline voice of lead singer, Suzanne Perry, and the childlike voice of guest vocalist, Jennifer Wilde (known then as Jennifer Ryan Fuller). While similar to their previous album in some regards, 'Ardor' has a more polished and mature sound from the drum programming and sampling to the extended use of English lyrics. Perry shows a marked growth and confidence in both her writing and vocal delivery, allowing more of her words to cut through the reverb and delay with a heavenly purity. Much of Perry's mystery is still blessedly preserved, however, with a surplus of cryptic poetry - some provided by Wilde, as well as Projekt labelhead, Sam Rosenthal - plus healthy helpings of her trademark 'glossololia.' Not only does this reissue offer excellent sonic quality, but an extended songlist including two never before released out-takes and a live recording. Plus, it boasts a beautiful new version of the cover art, expanded for the digipac format. As with the music, the band returned to the original source photographs to offer a higher quality version of the art than early 90's technology could produce. Additional band portraits taken in 1994 enhance the original design and add to the overall beauty of Love Spirals Downwards' Dream Pop masterpiece.

Here's what you say about
Love Spirals Downwards - Ardor.