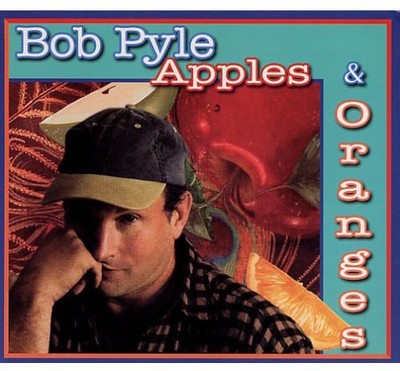 Bob Pyle is the Founder of the Baltimore-Washington Songwriter's Association, which has produced three compilation recordings. This is Bob's first full-length solo CD. Bob Pyle has been a songwriter and performer for over 25 years. He is also an award-winning old-time banjo player. He has had several novelty songs played on major market radio stations on the east coast, such as The Story of Steven L. Miles, which is a parody of TV lawyers. The Baltimore Sun newspaper has reported that Bob Pyle's songs have achieved a 'cult following'. This CD, Apples & Oranges, has taken four and a half years to complete. It makes use of some the area's finest musicians including Bluegrass legend DeDe Wyland and musical virtuoso Billy Kemp, who also co-produced the album. Concert violinist, Janice Martin, even plays her genuine 1708 Stradivarius violin on eleven of the twelve songs! The album's first cut, A World Made Out of Spam, is a catchy novelty tune which recently seems to have acquired a double meaning, as our e-mail boxes will attest! The second song, When They Close the Golden Arches, is a humorous ballad about the perils of eating at McDonald's. The title track, Apples & Oranges, is an amusing 5-minute journey on a horse-pulled apple cart. All songs have been given equal attention and meticulous production. Bob Pyle, on Apples and Oranges, mixes old time string band music, humorous lyrics, and exquisite production to create an album with a message of social relevance concerning the foods we choose to eat!

Here's what you say about
Bob Pyle - Apples & Oranges.