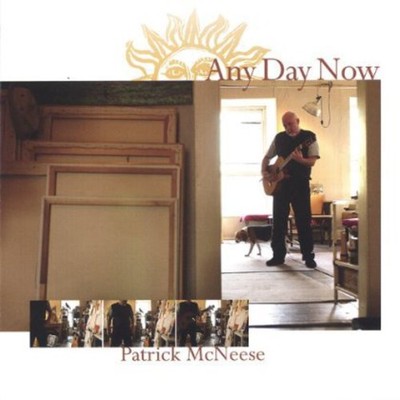 \'Any Day Now\' is a fine collection of musician and filmmaker Patrick McNeese\'s compositions. This new CD reflects his unique guitar and vocal style and presents to the listener new and various lights upon his musical terrain of jazz and blues inspired work. The ten tracks, alternately bathed in light and darkness, occupy their own slice of musical space as they seem to conjure the cinematic atmospheres that film can possess. A percussive, Latin style guitar with smooth, articulate saxophone and syncopated bass lines, create the soulful landscape for these story songs. But this is a singer\'s record and the key ingredients are McNeese\'s sometimes haunted, sometimes funky, always compelling lyrics and vocals. Patrick McNeese performs throughout the Upper South, both solo and as the Patrick McNeese Trio. His latest film documentary \'Searching for Wolf Boy\' is scheduled for release in early 06\' McNeese on his musical beginnings: \'With the explosion of Beatlemania in early 64' any major dude worth his salt was jamming in some form or another. My older brother Barry, who was then twelve years old and I just a year and a half behind, were no exception. We first made guitars out of baseball bats and cardboard and even attached rubber bands for strings. Then slowly from birthday to birthday, from Christmas to Christmas, we began to acquire some inexpensive but playable guitars and my favorite... The dazzling, red sparkle Maestro snare drum. It was a thing of rare beauty and capable of alerting all of our music loving neighbors to my heartfelt, percussive aspirations. At some point, seeing our enthusiasm for all things musical, our well-intentioned father brought home a semi-antique trombone and a trumpet he had purchased from one of the guys at his job. When he handed the trombone to my brother and the trumpet me, I guess he was hoping to soon hear Glenn Miller tunes wafting out of our upstairs bedroom. We gave the horns a try and even took lessons but only ended up producing a few tortured notes. Our straight-ahead, all rock format continued unabated. I think for me the arrival of the Beatles that winter served as vivid counter point to the events in Dallas the previous autumn. The assassination of John F. Kennedy was the first time in my life I encountered true shock and grief. It has occurred the day before my tenth birthday just as my eyes were beginning to flicker open to the larger world and my abilities to cognize such an event were beginning to develop. That next day was a miserable, overcast Saturday and I remember wandering around my deserted neighborhood, feeling vaguely lost and with the gnawing realization that my world had inexorably changed. My happy childhood was beginning to come to it's end and was no longer untouched by the man-made darkness this world can conjure. The Beatle's arrival that winter and music in general, became a light and a passage to something magical in that same dark world.\'

Here's what you say about
Patrick McNeese - Any Day Now.