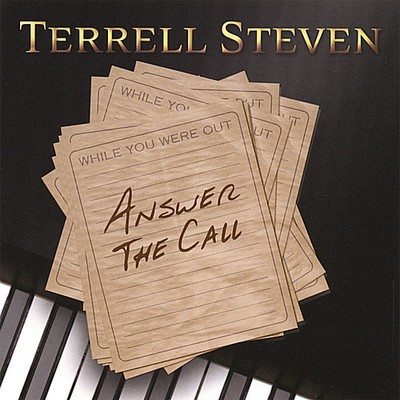 Terrell Steven has finally decided to answer the call. His passion to serve God through music often drives him from bed in the middle of the night, to write down a melody line or lyrics to a new song. 'I don't even know where the music is coming from half the time,' Terrell says. 'I just try to be open and it writes itself. I really feel that this is the right time to answer God's call.' Terrell was born, the fifth of seven children, to Don and Susan of Elk River, Minnesota. Growing up in their household was hectic, fun, and loud. Terrell's mother insisted he wear headphones when practicing the electric organ in the basement. He practiced for hours on end, until, at age seven, his mom asked him to unplug the headphones so she could hear his progress. She was astounded at his remarkable talent and immediately enrolled him in piano lessons. Terrell was a standout in the music classroom, but he had a hard time fitting in with other kids his age. As a teenager, Terrell contemplated entering the priesthood. He felt that God was calling him, and he felt that call most strongly when singing and playing piano at church. Then, he met Ellen. They were dining out with mutual friends when he noticed her across the table. About his future wife, Terrell said, 'There was something special and I knew it from that first moment.' Terrell and Ellen pursued their love of music together, each earning a Bachelor of Music in Education degree from the University of Minnesota. Terrell and Ellen married after college, and he accepted a teaching position at his alma mater, Elk River High School. He has continued to share his Christian music and liturgical ministry as music director at St. Timothy's Catholic Church in Maple Lake, Minnesota. Along with his passion for music and the Mass, he counts among his greatest loves his sons, Kazmer and Solomon.

Here's what you say about
Terrell Steven - Answer the Call.