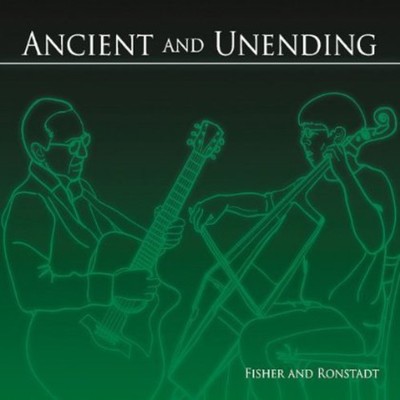 Bobby Fisher (guitar/songwriter) and Michael G. Ronstadt (cello/guitar/songwriter) are both international touring and studio musicians. When their paths crossed on a project, they realized that they shared a rare musical chemistry. So in spite of their hectic schedules, Bobby and Michael decided to record an album together and meticulously worked on over a period of 18 months. BOBBY FISHER (GUITAR) -- A world-renowned guitar virtuoso, Bobby is a multi-instrumentalist, recording artist, composer, and clinician. He has recorded and produced a number of his own music collections for various publishers, and has worked as producer and guest musician on countless others. Bobby is much in demand as a studio musician. His guitar work has appeared on commercials for Ford, Kroger, P&G, Chevrolet, Kings Island, Skyline Chili, and Coca Cola as well as television shows, including Life Styles of the Rich and Famous, All My Children, General Hospital, As the World Turns, Passions, and One Life to Live. As a guest musician, he has performed in venues ranging in size from small clubs to concert halls, arenas, and stadiums, most recently at Carnegie Hall and Lucas Oil Stadium in Indianapolis. Bobby currently lives in Cincinnati, OH with his wife and family. MICHAEL G. RONSTADT (CELLO) -- For seventeen years, Michael has been offering his music to audiences on cello, guitar and voice. Conversant with a wide range of styles, he has performed throughout the United States, Canada and Mexico with artists like David Bromberg, Linda Ronstadt, and Muriel Anderson. In addition to solo performances, Michael currently tours with his group Ronstadt Generations and regularly appears with Craig Bickhardt, Lisa Biales, and David Trotta. His playing can be found on over 50 albums from the last 12 years, including Trotta & Ronstadt's 3.30.11 (2011), Ronstadt Generation's Prelude (2012) and Lulo (2010), Lost In Holland's The Last Great Loss (2009), Amber Norgaard's last three albums from 2006-2010, and Santa Cruz River Band's Volume I (2004) and II (2005). Michael Ronstadt's 4 solo albums, Crazy Rhythm (2012), Bridging The Gap (2010), Cotton Dreams (2008) and Motionless Swirls (2006), "...show him to be a performer with an amazing command of the typical and exotic sounds of the cello, a true virtuoso and a man of instinctive musicality"(Dan Buckley, Tucson Citizen, 2008). Stephanie Ledgin, author of Discovering Folk Music, writes that Michael is '...an exceptional musician-composer, Ronstadt creates a masterful canvas with genre-blending explorations on cello and guitar in complement to thought-provoking lyrics'(2011). Michael received his Master of Music in Cello Performance from the University of Cincinnati College-Conservatory of Music (CCM) in June 2008, and his Bachelor of Music in Cello Performance from the University of Arizona in May 2006. He has studied under esteemed pedagogues Yehuda Hanani, Nancy Green and Dr. Gordon Epperson. Guest Musicians - Welcome Home: Shelley King, vocals; Ricky Nye, piano & organ; Sandy Suskind, saxophone; Jeff McLemore, bass; and Brian Malone, drums. Ancient & Unending: Sandy Suskind, flutes; Serenity Fisher, vocals. Mai Ka Pu'uwai: Tom Rasley, guitar. Produced by: Ed O'Donnell, Bobby Fisher, & Michael G. Ronstadt. Recorded & mixed at Soundstage Studio, Cincinnati, OH.

Here's what you say about
Fisher & Ronstadt - Ancient & Unending.