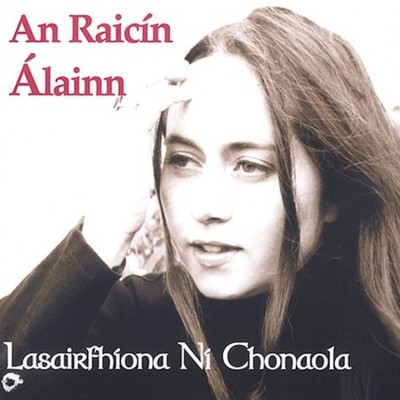 Lasairfhíona (pronounced Lah-sah-reena) Her debut album 'An Raicín Álainn' (pronounced An Rackeen Ah-lyn), launched in 2002 at the Festival Interceltique in Lorient, Brittany generated a very favourable response in Ireland and abroad. It was selected by Hot Press music magazine as one of the best folk albums of 2002 and described by fRoots magazine as 'one of the most sumptuous traditional albums to have emerged for some time.' Lasairfhíona was the subject of a special television documentary on Léargas, RTÉ that was directed by Moira Sweeney in 2002. She sang on Sinéad O' Connor's DVD, 'Goodnight, Thank You, You've Been A Lovely Audience' in 2002 and took part in many television and radio programmes since then. "Her cheerful sincerity, her gentle self-deprecation and, most importantly, her peerless talent.' The Sunday Times Lasairfhíona's singing featured on a compilation album of the best emerging Irish music that was produced by the Department of Arts, Sport and Tourism, Ireland and The Music Board of Ireland to mark the Irish presidency of the European Union 2004. Her second solo album released in 2005 is called 'Flame of Wine' a literal translation of her own name in Irish. The album was co-produced by Máire Breatnach, who also provides some beautiful musical accompaniment along with talented musicians Mary Bergin, Johnny McDonagh, Bill Shanley and singer MacDara Ó Conaola. Here Lasairfhíona conjures up a stirring mixture of song and music in her own individual style, including newly composed songs in Irish and English. A talent well recognized, she was nominated in 2005 for a prestigious Meteor award in Ireland. Lasairfhíona featured on a track entitled 'The Mighty Dancer' that she co-wrote and sang on her brother MacDara's debut album, 'The Love Token'. Her singing can be heard on IBM's new Porto Media web documentary called Stories of Innovation. 'An Raicín Álainn' "Listen to this album and you hear a pure breath of everything that is beautiful about Ireland." BBC Folk & Acoustic Reviews "One of the most sumptuous albums of traditional singing to have emerged for some time." fRoots Music Magazine "Her cheerful sincerity, her gentle self-deprecation and, most importantly, her peerless talent." The Sunday Times Flame of Wine 'Dazzling singing, consummate accompaniment and production, could anyone want more?' 5 star, Geoff Wallis, Irishmusicmagazine.com 'Flame of Wine is a mature and balanced collection that further outlines Lasairfhíona's particular wayward giftedness.' fRoots Music Magazine "Flame of Wine confirms Lasairfhíona's place in the pantheon of Irish music." Penguin Eggs Music Magazine.