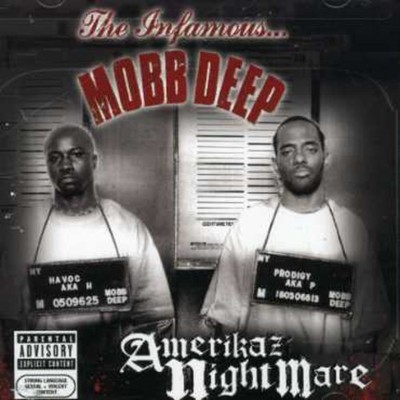 While most hardcore rap acts are dismissed as lowbrow exploitation, Mobb Deep proved exceptional, & at a young age became one of the few to garner unanimous acclaim from all sides of the rap community, despite their hardcore style. Initially, the duo - Prodigy & Havoc - were perceived as merely another hardcore rap act, but their breakthrough release, the Infamous (1995), became a touchstone album among the hardcore rap community. Mobb Deep became known coast to coast for their hellishly lyrical depiction of New York street life in the Queens projects, & a production style of haunting melodies & hard-hitting beats. At the end of a decade, Mobb Deep debuted at #3 on the Billboard album chart & made a rapid rise to platinum, exemplifying exactly how far the duo had come without compromising their harsh approach. In the summer of 2004, Mobb Deep gives US Amerikaz Nightmare. The hit single, "Got It Twisted," impacted video on 3/29 & radio 4/19. Check out "Dump" featuring Nate Dogg, "When U Hear The," with Noyd & more. Famed producer Alchemist joins the Mobb again, too (Mobb Deep "Backwards," Prodigy "Keep It Thorough," Jadakiss "We Gon' Make It" & Nas "My Book of Rhymes"). with career album sales approaching 4 million units, & a few years since their last release, Mobb Deep fans are in a state of ardent anticipation for the Infamous/Jive debut, Amerikaz Nightmare. In true Mobb Deep style, this record hits all the spots & cuts deep.

Here's what you say about
Mobb Deep - Amerikaz Night Mare.