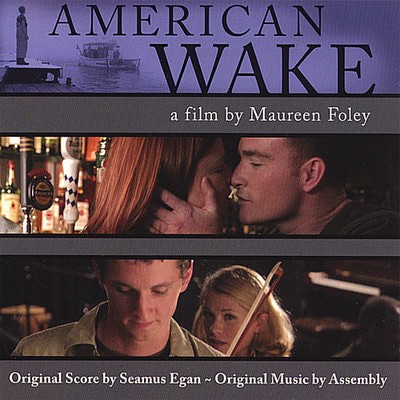 A deep, rich and wistfully beautiful score and two new songs were created by Seamus Egan for Maureen Foley's independent feature film AMERICAN WAKE. Widely hailed as one of the world's greatest Irish musicians, Egan previously composed the hit soundtrack for 'The Brothers McMullen' and co-wrote Sarah McLachlan's Grammy-winning 'I Will Remember You.' He performed on the soundtrack for the Oscar-winning film, 'Dead Man Walking' and composed the musical 'Dancing on Dangerous Ground.' Hailed as a 'multi-instrumentalist wizard,' Egan plays flute, tenor banjo, mandolin, tin whistle, low whistle, guitars and bodhran. His is both a critically-acclaimed solo recording artist and, since 1996, the leader of the renowned Irish music band, Solas. The 'avant folk' quartet, Assembly, collaborated with Seamus on the soundtrack and also appears in the film, performing original compositions. Sam Amidon, who stars in AMERICAN WAKE, co-founded the group--originally known as Popcorn Behavior--when he was 13 years old. The other members include Sam's brother Stefan, Keith Murphy, and Thomas Bartlett, with whom Sam collaborates in Doveman. Steeped in the New England folk scene and in traditional Irish music, Assembly has impressed national critics with their radical reworkings of the genre, incorporating minimalism and creating, in their own words, a trance-like, dance-oriented rhythmic drive and meditative serenity. Antje Duvekot, who co-composed with Seamus the soundtrack's two original songs, 'Hold On' and 'Enough Tears', recently released 'Big Dream Boulevard' to national acclaim. Produced by Seamus, the CD has received rave reviews and has established Antje as a thrilling new talent!

Here's what you say about
Séamus Egan - American Wake Soundtrack.