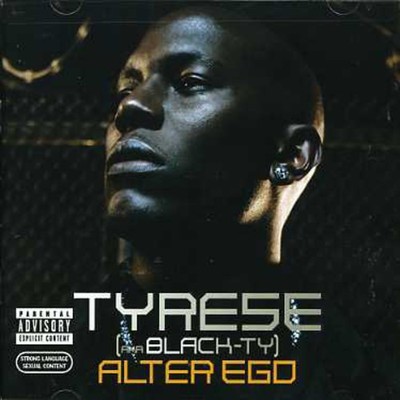 Tyrese, the multi-platinum, Grammy-nominated singer, songwriter, actor, writer, producer and now rapper releases his long-awaited and much talked about double CD Alter Ego on J Records. Alter Ego serves a dual purpose, a homecoming to his R&B fans around the world with one disc full on soon to be classic hits; and an introduction to the hip-hop world as he unreleashes his rapper alias Black Ty on the other disc. The first single from the album is theR&B single 'One' Produced by Underdogs. Tyrese's voice undeniably stands out in today's cluttered R7B arena. On Alter Ego's R&B side, Tyrese joins forces with producers the Undergogs 'One,' 'Better to Know', Brian Michael Cox 'Gotta Get It', Lil' Jon 'Turn You Out' R. Kelly 'Hurry Up', Erick Dawkins and Tony Hicks 'Morning After,' 'Better Than Sex,' 'Hey Ms. Parker' and Trick Stewart 'Lights On'. on the hip-hop disc, Tyrese shines as rapper Black Ty, which comes naturally since he once was a member of the rap group Triple Impact prior to the success of his solo singing career. Manni Fresh, Scott Storch, All Star and various members from the Frontline Boys add their production skills on the hi-hop disc wich also features guest appearances by the Game, Snoop Dogg, Kurupt, Too Short, David Banner, Method Man, Lil Scrappy and Manni Freshe.

Here's what you say about
Tyrese - Alter Ego.