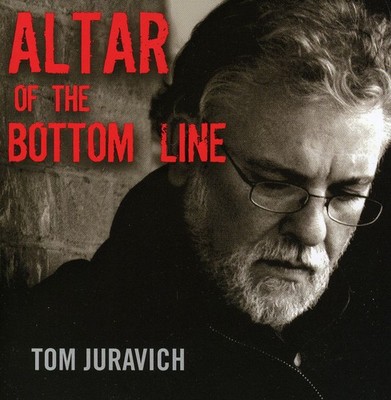 Northampton, MA. - A new roots-rocking musical release, Altar of the Bottom Line, by singer-songwriter and labor activist Tom Juravich, paints intimate portraits of the everyday struggles and dreams of workers. The dirty grunt work so many immigrants do; the soul-crushing monotony and surveillance of call centers; the bashing of teachers and other public sector workers; the corporate arrogance and the disruption of lives that comes with placing profit above all else - this is the stuff of work in the early 21st century, and this is what Juravich writes about. "There's not a lot of music these days that speaks to peoples' working lives" Juravich said. "I wanted to capture that experience and make these private struggles public - to shine a light on what people face everyday on the job." To accomplish this, Juravich spent time listening to more than 100 workers in kitchens, coffee shops and break rooms over the past five years. On Altar of the Bottom Line he digs down deep and brings up lyrics glistening with sweat and tears, and melodies that capture these moments. The songs come alive with a band of top players, including Dave Mattacks (drums), Duke Levine (electric guitars) and Richard Gates (bass). The ensemble does much more than back Juravich's resonant voice and acoustic guitar - the players spark with each other against the evocative imagery of each song, and weave their own soulful interpretation of the stories. Altar of the Bottom Line is not just a rant against lousy jobs and bad bosses. Alongside anger and frustration, you hear incredible resilience and dignity. From Juravich's Rising Again, released by the Auto Workers union during the first wave of plant closures in the 1980s, through his A World to Win, Out of Darkness (Flying Fish/Rounder), and last year's Tangled in Our Dreams, (Finnegan Music) Juravich has always sung about workers fighting back in situations that try to rob them of their humanity. Altar captures this spirit in Juravich's originals, and in songs by Billy Bragg, Richard Thompson, Woody Guthrie and others. Seventeen U. S.-based unions came together in an unprecedented effort to sponsor Altar of the Bottom Line. "It's just wonderful to see unions coming together to support this kind of work," says Juravich. In addition to his song-writing and singing about workers' lives, Juravich has also written extensively about work and labor as a Professor of Labor Studies and Director of the Labor Center at the University of Massachusetts. The interviews that inspired the songs on this CD also form the basis for his new book, Altar of the Bottom Line, due out in 2008.

Here's what you say about
Tom Juravich - Altar of the Bottom Line.