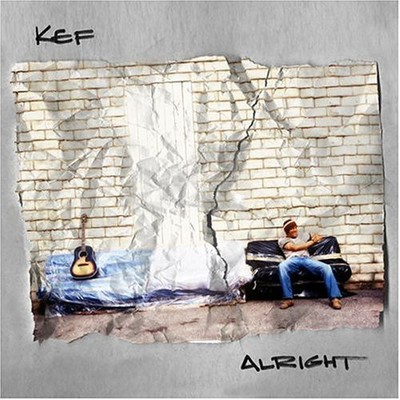 Singer / songwriter, Kef, has been working and playing in and around the music business for nearly his entire life. Born Dave Keffer on December 4, the tag, 'kef,' was given to him by neighborhood friends at a young age in his hometown of St. Paul, Minnesota. 'As a kid, I always had music around,' says Kef, 'My mother sang with a group in church, my uncle was a working folk musician, and my sister was already taking piano lessons.' Kef learned to play the piano by ear in grade school, and as he became interested in computers and recording technology, he began producing his first multitrack recordings by the fifth grade. 'They weren't very polished,' he says, 'but, I used to have a blast!' During high school at a performing arts magnet school in St. Paul, he began logging hours as a DJ, and he was able to keep his interests in music recording alive by digging the school's sixteen-track recording studio. But, some of his most memorable times as a kid were spent listening to vinyl records with his friends. 'We would just hang for hours in the basement playing table tennis and listening to old tunes ... Joe Walsh ... Boston ... Steve Miller ... even the Bee Gees! They don't make tracks like that any more!' Kef's technical abilities and his penchant to get crazy landed him a job as a DJ/MC for Coca-Cola's Spring Break destinations. From Daytona Beach to Panama City to one of the largest single Spring Break gatherings in the country, Coca-Cola Beach South Padre Island, Kef hyped groups of up to 15,000 people every March for several years. However, blending his interests in entertainment, technology, and creativity would become essential in 1993 when he began working for the musical artist, Prince. First, as an electronic drum and sample programmer over two concert tours, and later, as the in house music video editor, Kef soaked up everything he could about the music business. 'Being from the Midwest, it was rare to have experiences of that scale. It really changed my focus.' In 1995, Kef picked up and moved to Los Angeles, and in the Y2K, he released his first official solo project, a pop / hip-hop joint called 'Poppaloopa,' for the independent mark, Amherst Records. Kef wrote the majority of the material and produced the project as well, and since he's a workaholic by nature, he also jumped at the opportunity to shoot and edit the video for the CD's first single, 'Hottie Boombalottie.' The single had explosive response on Radio, and the video reached number 10 on the pop charts of the request driven music video network, The Box. 'It was a fun summer,' Kef says. 'The video featured the girls of Baywatch, and there were a couple of weeks when it saw more than 2400 requests in three different regions!' However, with limited promotional resources, the project never achieved national attention. Kef dove back into work, writing and recording new material for other artist's projects and for various television and film productions, and in 2003 he began to compile tracks for his second full length solo release. 'I taught myself how to strum a guitar,' he jokes, 'so the songs are a bit more organic now! More like what I grew up with.' And, with the help of several music industry friends, including guitarist, Carlos Villalobos; session drummer, Daniel Bejarano; and Cory Lerios, front man of 70s super group, Pablo Cruise; kef has begun to create a fresh and memorable pop rock collection that is sure to finally bridge the gap between the hook-driven radio music of today and the unfadable, record-collection music of our youth.

Here's what you say about
Kef - Alright.