Recipe - All You Can Eat 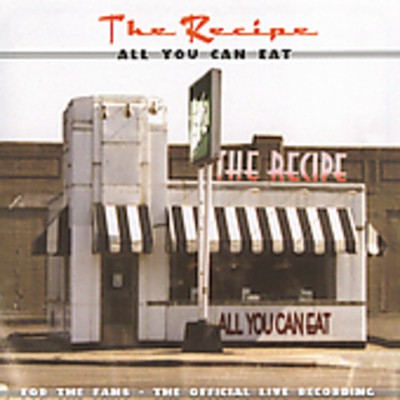 The first live CD from this long-running band! Having created a rabid fanbase over years of heavy touring, The Recipe has become one of the signature groups of the intrepid roots music scene. Founded in 'porch music', this band's sound combines stellar songwriting and lyrics with a communal spirit that keeps the music unique and celebratory. ----------- In the 'Family and Friends' spirit of The Grateful Dead, Delaney and Bonnie and Willie Nelson comes one of the most original and refreshing bands on the roots-rock / jamband scene today. Hailing from the musically rich Mid-Atlantic region, THE RECIPE sprung onto the scene in 1995 with their debut CD, 'LOVE MARBLE HOE DOWN', introducing listeners to a fresh mix of insightful songwriting and superb musicianship. What came next was a non-stop touring schedule resulting in a fan base that is the envy of bands everywhere. The band's high-energy live shows have fortified their stature considerably on the national club and festival circuit. With the 1998 release of 'NIGHT OF THE PORCH PEOPLE' and 'GEODE' in 2000, the band remained consistent in it's devotion to songwriting and in it's work ethic, playing some 200 dates per year. From the very beginning, THE RECIPE'S high-energy live shows and good-time vibe have motivated their fans (affectionately referred to as 'porch people') to get up and dance, making the shows part concert and part family reunion. It is in this spirit that the band stages their annual RECIPE FAMILY COOKOUT in West Virginia. This three-day festival of music, camping and football draws thousands to the pristine natural beauty of the West Virginia mountains. The festival has featured such artists as Leftover Salmon, Keller Williams, John Cowan, Peter Rowan and Tony Rice and dozens of others resulting in some of the most memorable on-stage musical collaborations between THE RECIPE and their guests. The festival also benefits environmental and food bank causes. The band's demand on the Summer festival circuit have allowed them to share the stage with such artists as String Cheese Incident, Moe, Les Claypool, Govt. Mule, The Derek Trucks Band, Bela Fleck and the Flecktones, Sam Bush, Donna The Buffalo and countless others. The band's three CDs routinely finish in the year-end top selling list of the respected Home Grown Music Network each year. With the band's official website, the recipe and several fan operated websites devoted to the band, each generating thousands of hits each week from all over the world, the word is spreading about the infectious grooves of THE RECIPE.

Here's what you say about
Recipe - All You Can Eat.