Loves It - All We Are 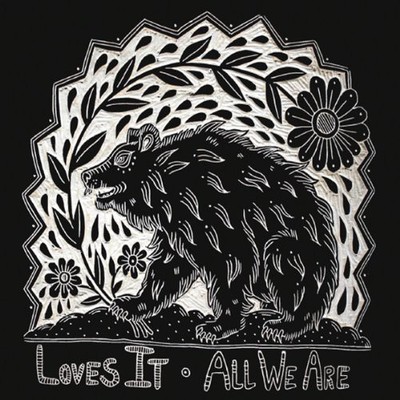 Loves It - All We Are - Team Austin Records - October 29th, 2013 "Makes a racket like a 1930's style travelling medicine show that was reared on a diet of Jonathan Richman records." - Tuneraker "There's a lovely simplicity in things that come in pairs. White clouds and a blue sky, lemon slices and iced tea, and Jenny Parrott and Vaughn Walters." - Flagstaff Live Born in Austin, Texas in 2010, Loves It is the duo comprised of songwriters of Vaughn Walters and Jenny Parrott that has already played hundreds of shows in the US, Europe and Asia in that short time. The harmony driven pair often switches between guitars, fiddle, and banjo, adding special guests to create a bigger sound, and playing with a veneration for tradition, and a determination to bring a modern voice to their favorite folk, country, gospel and punk sounds. "We're two songwriters who learned to back each other's songs up on the road," says Parrott of how artistic camaraderie makes this combination of influences work under the reality of a work ethic that sees Loves It on the road more often than not. "We played 200 shows in 2011 supporting our first album Yay," says Walters. "It would have been 220 but we had to cancel a month of shows because we got plowed by a beer truck." None-the-less, 200 shows was still enough to get the attention of songwriter, novelist, and politician "Kinky" Friedman who proclaimed the band "an American original" with voices that "come into your heart like that of an angel." After getting their sea legs in no time as a touring act, Loves It decided to put their belongings into storage in April of 2012, and hit the road full-time. "We booked as we went and we've been on the road ever since," Walters explains. Then, when it came time to make their second album (All We Are, due Oct. 29th via Team Austin), Walters wondered, "How do we find time to record and where, since we don't live anywhere?!" Interestingly, Walters had just recently heard of a band that purchased everything they needed to make a record on eBay, and then sold it all when they were done. "I bought a badass Neumann mic and we booked some time at EAR Studio during a few days off in Austin. We worked with a great bass player (Chris Crepps of Dale Watson's band), a great drummer (Jonny Wolf of Ghost Wolves), and we got the shred section from The Moonpies (Zach Moulton on steel and Catlin Rutherford on lead guitar) to burn through the whole album in three days." Walters and Parrott then headed back out on the road, obsessing over mixes that were e-mailed to them to the point of killing their van's battery from listening all day in Salt Lake City. True to a life that takes place on the road, Walters remembers receiving the final mix while driving through Iowa, listening to the master in New Haven, CT and receiving the artwork in Macomber, West Virginia. The first single from All We Are is "Wild," a collaborative tune that turned into a Springsteen-style rocker. Other songs on All We Are include "Dancing" which Parrott says was inspired by dreams, cross country travel and "years of mingling with rough people," and "The Angels Sing" which is the result of listening to "tons of Sam Cooke." Of course, even artists who live life on the road the way that Loves It does need to come in for a landing every once in a while. Says Parrott, "When we are not touring, we crash out in West Virginia, Nashville and Austin to work on songs and watch crime drama." Parrott confesses a special affinity for the Lone Star State, saying: "When we stay away from Austin too long, we miss the country music and two stepping." All We Are, the second album by Austin-based (sometimes!) duo Loves It will be released on October 29th via collective label Team Austin Records. The album's first single "Wild" is streaming now. Look for Loves It on tour forever.

Here's what you say about
Loves It - All We Are.