Scotland Barr & the Slow Drags - All the Great Aviators Agree 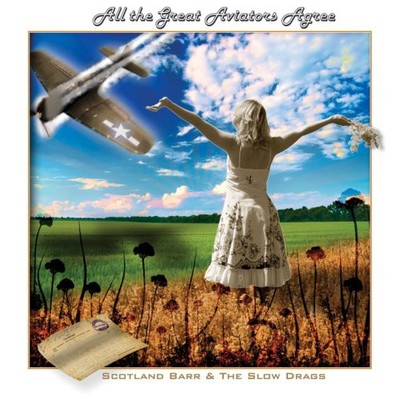 Scotland Barr and the Slow Drags is a Portland, Oregon band that is redefining "Roots" by exploring their own. This is a roots-rock band that is as likely to draw inspiration from The Beach Boys and Warren Zevon as they are from Merle Haggard or Gram Parsons. Jangly pop, gut-bucket country, urban folk, 60's psychedelia and straight up rock collide in a mid-air collision, creating a compelling clamor that has been called "West Coast Roots." ALL THE GREAT AVIATORS AGREE is the second release from this passionate six-piece ensemble. The album throbs with a big heart capable of dynamic extremes: smoky vocals grapple with soaring four-part harmonies, keyboards tangle with overdriven guitar, pedal steel bends around an acoustic 6 string, drums irreverently confuse country and rock. Above it all, lead singer Scotland Barr's bold, emotionally resonant songwriting and insistent melodies shine through, with rough edges intact. ALL THE GREAT AVIATORS AGREE is an album that seems achingly familiar yet is a work of singular character... capturing a great band as they lift off on their next remarkable voyage. "Scotland Barr & the Slow Drags want to take you down with them and with one listen, you'll want to go... Barr's vocals have a boozy nonchalance, and the four-part harmonies on some songs recall the Beach Boys and the Band." - Glen Starkey, San Luis Obispo New Times '...combines the best parts of The Allman Brothers, Wilco, Steve Earle, and Merle Haggard.' - Don Campbell, OregonLive. "[Scotland Barr & The Slow Drags] mine roots music, mutating centuries of tradition with a modern sensibility much like the Band did-with a gravelly voiced singer and an ear for imagery." - Ap Kryza, Willamette Week.

Here's what you say about
Scotland Barr & the Slow Drags - All the Great Aviators Agree.