Claudia Russell - All Our Luck Is Changing 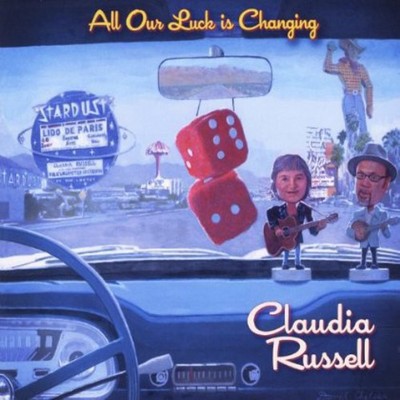 All Our Luck Is Changing - The New CD from Claudia Russell All Our Luck Is Changing is the new recording from San Francisco-based singer/songwriter Claudia Russell. It's her fourth CD and her first since 2007's Live Band Tonight. With it's memorable melodies and seductive soundscape, Claudia Russell's new album, All Our Luck Is Changing, elicits the classic era of ageless American music. Russell delivers a whimsical melting pot of traditional and contemporary styles, from earnest folk to sweet jug band blues, driven by her deft guitar work and a versatile, expressive voice that tips the hat to artists as diverse as Dolly Parton, Suzanne Vega and Aretha Franklin. Claudia paints her material with emotional depth, looking forward and back at life with both childlike awe and the mature wisdom of a musician with four decades of music under her belt. Working with three-time Grammy nominee producer Peter Case, Claudia and her husband Bruce Kaplan (guitar, mandolin) cut the majority of the record live with some of LA's best musicians. Using just a few overdubs, Case created a balance between the immediacy of a live record and the freedom to embellish that the studio experience inspires. Claudia and Bruce have honed their distinctive sound over a decade of touring festivals, clubs, concert series and house concerts, often as a duo and sometimes with their ever-changing band, The Folk Unlimited Orchestra. On stage they draw audiences in with clever banter and an entertaining "who me?" attitude. In their various configurations, Russell and Kaplan have graced the stages of the Kerrville Folk Festival, The Great American Music Hall, Club Passim and key acoustic venues such as McCabe's and Berkeley's Freight & Salvage. The duo call the San Francisco Bay Area home and are one of the cornerstones of it's thriving roots music scene. Before focusing on her own songwriting, Claudia was a member of BMG recording artists Maggie's Farm, sharing stages with Willie Nelson and Kris Kristofferson. She was also one third of the award-winning vocal trio The Life Is Grand Band, part of the Smithsonian/Folkways Fast Folk collection. Claudia's first CD, Song Food, earned Best New Artist honors from Boston folk music powerhouse WUMB. Her two other previous albums have also been championed by public radio and Claudia has been featured in Sing Out, The Boston Globe, and the SF Chronicle. NPR's All Things Considered interviewed Claudia in connection with her father, Val Rosing's (aka Gilbert Russell) 100th birthday. Rosing recorded more than a 100 songs and had a million-selling hit in the 1930s with the original BBC recording of "The Teddy Bears' Picnic." The song remains a children's favorite even today. Russell is joined on All Our Luck.. by some long-time collaborators and a few new ones. Her husband, Bruce Kaplan, plays mandolin and electric guitar. Debra Dobkin, who has played on each of Russell's studio recordings, lends her percussive feel to the album's songs; she has recorded as well with Richard Thompson, Bonnie Raitt and Shawn Colvin. Viola player Tom Talley goes all the way back to Russell's first high school band and has recorded and performed with artists such as Leonard Cohen, Michael Jackson and Willie Nelson. Keyboard player Carl Byron is an in-demand Los Angeles session player and appears on all of Russell's recordings. Likewise, Dobro player Eric Lewis (Robin and Linda Williams) is a close member of Russell's musical tribe, touring the Midwest with her each summer. Russell plays acoustic guitar on the album with a deft touch for open tunings and intricate rhythms. Case plays harmonica and guitar and brought in drummer/percussionist Danny Frankel, whose recording credits include Laurie Anderson, Fiona Apple, Madeline Peyroux and k.d. Lang, among many others, bassist Paul Eckman (Janiva Magness, DJ Bonebrake Trio) and Mike Fortunato on trumpet. Case wanted to make a record that highlighted Russell's extraordinary talents as a guitarist, singer and songwriter. As producer he adds a steady hand to the recording, letting Russell be herself to subtly infuse the nuanced result. "So You'll Believe," a spare, earnest ballad in live performance, takes on a thick and dreamy pop sensibility. "I Remember the Wind", with trumpeter Fortunato taking the solo, sounds like it should emanate from a smoky jazz club. And Russell and Case together created a genre-bending version of Ann Peebles' "I Can't Stand the Rain" that marries Russell's folk foundation to the vibe of 1970 Memphis soul. Eight of the songs were written by Russell with an occasional assist from Kaplan. Rounding out the record is the classic Lone Justice ballad "You Are The Light," "These Shoes" (a song Russell found on an 1980s Everly Brothers record) and the above-referenced Anne Peebles classic. "Claudia is an excellent singer and songwriter with a great sense of detail that I really appreciate," says Case. "Her storytelling has really come into it's own on this record." The title track, All Our Luck Is Changing, demonstrates those skills with a lightly fictionalized story of Russell's first road trip with her mom, during which she gets to know Dave, the man that would soon become her stepfather. He says that I should call him Dave, which sorta sounds like Dad He looks like Andy Griffith and he whistles when he's glad Dave sells life insurance - I'm not sure what that means, But the odds got so much better, when we went from two to three All our luck is changing... Russell and Kaplan, though serious about their music, are not above having a little fun. The CD's cover (painted by David Chelsea) goes along for the ride to Vegas. Of course, all this is talk. Press the Play button, and make up your own mind!

Here's what you say about
Claudia Russell - All Our Luck Is Changing.