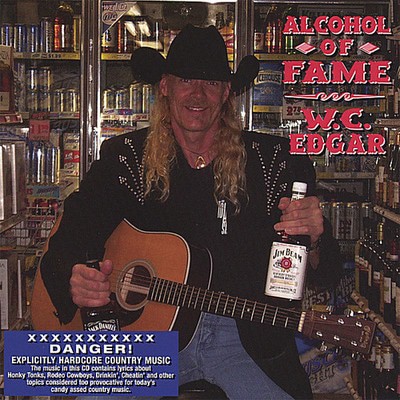 W. C. EDGAR BIO & ALBUM Profile: Alcohol of Fame... In a not so perfect world filled with a facade of pretty faced boy bands with absolutely no substance, and lame reality 'Idol' shows filled with bad karaoke shower singers, stands a guy at six foot three who's paid his dues in Country Music. WC Edgar has ridden a lot of roads in both rickety vans and million-dollar tour buses since his start in country music playing steel guitar for the likes of Alan Jackson, Tim McGraw, Marty Haggard, Ty England, Jeff Carson, Dale Watson, Leroy Van Dyke, Johnny Lee as well as The Country Music USA Show at Nashville's once famed Opryland USA. But now, at last, it's his turn. He's the new Country Music Artist and has taken the time to make an album of his own that includes his buddy Daryle Singletary helping him out on the last line of a WC Edgar ballad titled 'Mirrors Don't Lie'. Remarkably, Edgar wrote every song on the album without the aid of a single co-writer. These aren't just good songs, they're classic ones. He's mastered the sounds and idioms of Country Music in it's rhinestone heyday. Alcohol of Fame is a beacon of traditional Country Music, one that sparkles with fiddles, steel guitars and tales of drinking too much and loving too hard. It's one of the most exciting collections to come down the pike in years. Alcohol of Fame is more than an album, It's an event. Prepare to be astounded! Former Editor Billboard Nashville From Nashville's Music Row Magazine May 9, 2008 W.C. Edgar/Alcohol Of Fame Writer; W.C. Edgar Producer; W.C. Edgar with Greg Cole Publisher; W.C. Edgar Music BMI Universal Vision Entertainment Nashville W.C. Edgar is here to remind us that in Country Music, there should always be room for something like 'Alcohol Of Fame'. As you might expect from the title tune, Edgar's CD is Hardcore honky-tonk. He's a veteran steel guitarist for artists ranging from Alan Jackson to Dale Watson, from Tim McGraw to Johnny Lee. Now he is at last the front man, and he sings with great conviction, plus he wrote every song solo. As long as there are artists like this still making records, I'm a happy camper. Robert K. Oermann, Music Row Magazine WC Edgar is a good ol' boy with that rapidly recognized Texas-sized- talent. His Texas Rain is a special treat. This recording is 'radio-friendly' ... all the way. -Bill Mack XM Satellite Radio Endorsed by this great AMERICAN Company... Martin Guitars, still built with pride right here in the USA!

Here's what you say about
W.C. Edgar - Alcohol of Fame.