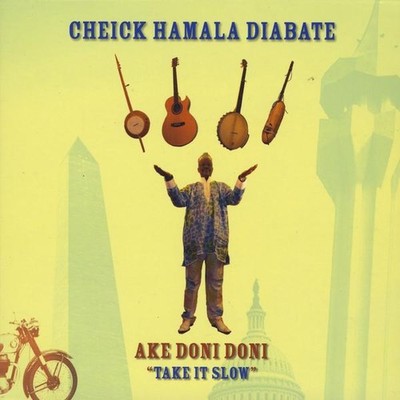 Cheick Hamala Diabate is a West African historian in the Griot tradition, and a world-recognized master of the ngoni, a Malian traditional instrument. A sought after performer, lecturer, storyteller and choreographer throughout Africa, Europe, Asia and Canada, Cheick Hamala began touring in the U.S. in 1995. His performances have been featured at such notable venues as The Smithsonian Institute, the John F. Kennedy Center for the Performing Arts, New Orleans Jazz & Heritage Fest and many of the top festivals across the US. A steward of the 800 year-old tradition of the Griot, the storytellers of West Africa, Cheick Hamala shares the oral history, music and song of his culture as it was passed on to him from birth by parent to child. At an early age, Cheick Hamala easily mastered the ngoni, a stringed lute and ancestor to the banjo. He later learned to play the guitar from his uncle, legendary Super Rail Band guitarist Djelimady Tounkara. At age 12, Cheick Hamala was invited to the National Institute of Arts in Bamako, Mali's Capital, where he studied music, graphic arts, cinema, literature and theatre. He began his international performing career upon graduation, learning from and playing with the full pantheon of Malian musical greats, including Toumani Diabate (a first cousin), Oumou Sangare, Ali Farka Toure and Salif Keita to name but a few. Upon coming to the US, Cheick Hamala was intrigued by the resemblance between his beloved ngoni and the American banjo, even sharing tunings and picking styles. He has since learned to play the banjo at a virtuosic level, including collaborations with Bela Fleck and Bob Carlin. Cheick's album of banjo duets with Carlin, From Mali to America, was nominated for a Grammy Award in 2007 for Best Traditional World Music Album. Now residing in Washington, DC, Cheick Hamala works with notable traditional African dance companies, serving as instructor, choreographer and performer. He also performs solo and with his ensemble playing traditional Manding Griot instruments. With the release of his most recent album, Ake Doni Doni - Take it Slow, Cheick Hamala has successfully fused the traditional rhythms and vocals of his ancestors with the more electric, American sounds he has absorbed over the past decade living in the US, including guest appearances by celebrated bluesman and good friend Corey Harris. Whether playing solo, in a traditional trio, or rocking with his full 10-piece orchestra, Cheick Hamala always reflects the historical integrity of an important art form with a rich tradition stretching back hundreds of years to the formation of the Great Malian Empire.

Here's what you say about
Cheick Diabate - Ake Doni Doni Take It Slow.