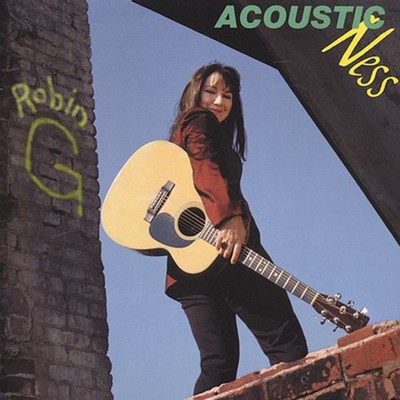 Robin Greenstein is a multi-talented singer/songwriter from New York City. She is probably the best kept secret in contemporary acoustic music today. Her roots are in traditional folk: she plays both guitar & 5- string banjo, yet her music covers a wide range of styles and the full production is based around her accomplished acoustic guitar style. She's been compared with such greats as James Taylor, Karla Bonoff, Bonnie Raitt and Carole King. Growing up in the Motown and Beatles era, yet studying traditional folk music and classical guitar for many years have all helped form her musical style. In a typical set, between her own songs, you might hear a Gershwin standard, a Rev. Gary Davis blues or an old-timey banjo tune. Robin performs extensively in the college market and has been adding clubs and festivals to her venues. 'I was tired of people always asking me what kind of music I played, so I wrote a song about it. I call it Acousticness.' 'Acousticness' features a full rhythm section based around her accomplished acoustic guitar style. Traditional instruments (harmonica, banjo, mandolin) mesh beautifully with contemporary keyboards & electric guitars. Of course, a CD by Robin wouldn't be complete without wonderful harmonies. The title song is a celebration of musical influences and defines her music; a style that is rooted in acoustic folk & blues music, but containing elements of rock, pop, country, R&B and jazz. Robin recorded 'Acousticness' with Rob Friedman, a multi-talented songwriter, producer and player. Rob has produced many indie songwriters as well as two SONY- Canada acts who have won Junos (the Canadian grammy). He was also co-writer of a worldwide hit for Paul Carrack, 'Don't Shed A Tear.' Some great musicians perform on 'Acousticness' including: Mike Visceglia (Suzanne Vega), Doug Yowell (Sophie B. Hawkins, David Benoit, Richard Julian), harmonica player Bob Meehan (Stained Grass Window) and Danish guitarist Aske Jacoby, who is well known in his native Denmark. Two songs were recorded in New Orleans with Clarence Gatemouth Brown's band Gate's Express (Robin's cousin Joe Krown plays keyboards for Gatemouth).

Here's what you say about
Robin Greenstein - Acousticness.