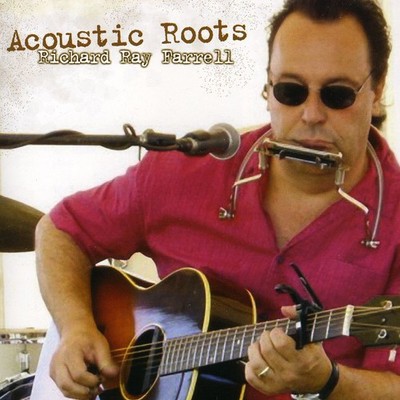 Acoustic Roots Blue Beet (2005) 100002 19 tracks, 59 minutes. Recommended. Although Richard Ray Farrell is surely a 21st century blues artist, his stellar approach to music has an unquestionable ability to carry listeners back decades in time, and wrapping your ears around his new Acoustic Roots CD may well have you lost in a time warp. Recorded completely live in the studio without overdubs, Farrell tackles a full slate of country blues gems with nothing more than an acoustic guitar, a racked harmonica, and a voice that sounds as tough and coarse as a Mississippi dirt road in July. Whether he's channelling Blind Lemon Jefferson in One Dime Blues, Leadbelly in Ella Speed, or Blind Blake in Rope Stretchin' Blues, Farrell digs down to the basics of great blues with conviction and offers deft guitar work, scrappy harp interplay, and vocals that deliver lyrics in solid form be they poignant, potent, or playful. His slide work in Sassy Mae recalls the brilliantly ragged approach of Son House, and for the traditional Buck Dancer's Choice or his own Blues-Flamenco, the fingerpicking is stellar. Farrell shines just as brightly on Delta pieces associated with the masters; Bukka White's Fixin' To Die and Shake 'Em On Down, Son House's Jinx Blues, or the absolutely chilling version of Robert Curtis Smith's Lonely Widower, all standouts. He leaves few stones unturned with more from the catalogs of Mississippi John Hurt (Louis Collins), Smokey Hogg (a searing Too Many Drivers), Blind Boy Fuller (Jivin' Woman Blues), Bo Carter (Let's Get Drunk Again and I Want You To Know) and others. While times and technology have changed drastically over the years, Richard Ray Farrell seems to have stepped right out of the 1930s and into the present on Acoustic Roots, and never once sounds out of place. A crowning achievement and a winner from start to finish. - Craig Ruskey.

Here's what you say about
Richard Ray Farrell - Acoustic Roots.