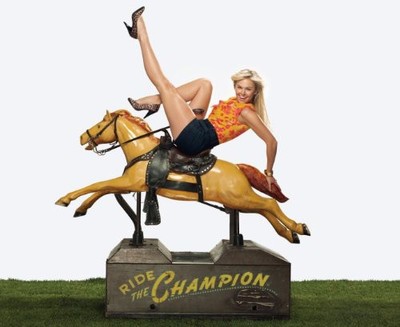 There are two sides to every story, as the old adage goes, and there are certainly two sides to the story of singer-songwriter Laura Bell Bundy's daring Mercury Records debut release, Achin' and Shakin'. Laura Bell bypassed the tried-and-true Music Row approach usually taken on country albums and instead created a bold concept album that is essentially two separate albums within one project. The album's title aptly describes the project's division: Achin' is a collection of slow and sultry country songs and Shakin' is a group of sassy songs that are equal parts humor, confidence and attitude. One side presents a modern-day mixture of Loretta Lynn, Minnie Pearl and Sex and the City's Carrie Bradshaw; the other unveils country's answer to Norah Jones. The debut single, "Giddy on Up," is an irresistibly upbeat and saucy kiss-off to a cheating lover, while the romantic "Drop on By" oozes sensuality as she beckons a lover to visit. Both sides pay homage to traditional country and soul music with a reinterpretation featuring modern production. "'Two records, one woman' is my motto," jokes Laura Bell, who penned all but one of the songs on the album. "I have two different sides of my personality," she explains. "I have a crazy, wild, humorous, outspoken personality, and then I have a depth that only opens up when I am alone or with one other person, and that is captured with this album. I really couldn't do one without the other." Laura Bell Bundy is a well loved star from New York's Broadway, where she made a name for herself in some of the biggest musical theatre productions in the world, including a lead role in Legally Blonde, Hairspray and Wicked. She has also had roles in various films, including Dream Girls and Jumanji.

Here's what you say about
Laura Bell Bundy - Achin' and Shakin'.