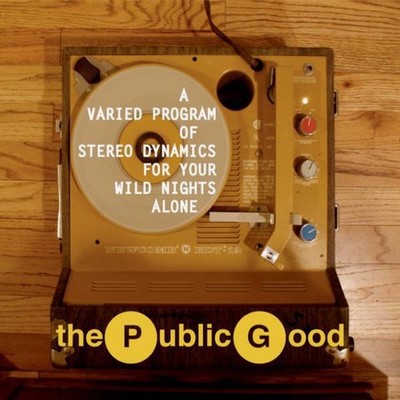 Although The Public Good have all the makings of a great power-pop band, their gritty sound and offbeat perspective take them beyond that label to a category all their own, which makes them a band worth following. Some of their songs, such as "(Imagine the Girlfriends I'd Have) If I Still Had Hair," (from the 2009 release 'No. 1') are fun and funny on first listen, as the balding singer wishes out loud that science could clone Bob Dylan's "big fro." But keep listening and the song's sense of longing and self-doubt becomes gently poignant. Other songs, like "Black Ice," from the group's new release 'A Varied Program of Stereo Dynamics for Your Wild Nights Alone', are deadly serious from the opening riff. "Black Ice" is drawn from bassist/vocalist Steve Ruppenthal's personal experience, wrestling with his father's cancer diagnosis. "It's the little things in life that mean so much/ A tiny black spot that keeps us in touch," he sings of an X-ray result that changes a family's dynamics. "There's no cheap emotion in that song," says keyboardist/guitarist/vocalist Sam Esquith. "It's not sentimental at all." But whether silly or sobering, The Public Good's songs are always intelligent. For the cynics who hold to the belief that smart rock & roll is some kind of an oxymoron, just one listen to The Public Good will put that fallacy to rest. Many of their songs, like the aforementioned "Hair" and "Black Ice," can be appreciated on several levels at once. More importantly, The Public Good's music is honest. "The songs are stories. Usually they're not literally about us, but they're true to what we see going on around us," says guitarist/vocalist John Elderkin. "We hate cliché and the hazy emotions that've already been written about to death." Although the members of The Public Good, which also includes Chris Garges on drums and percussion, grew up loving British Invasion bands, they were also strongly influenced by original punk bands such as The Clash and The Sex Pistols. For Garges, Elderkin, and Ruppenthal, who grew up in North Carolina's stifling radio atmosphere of non-stop classic rock, discovering punk rock set them apart. "I was much more influenced by punk and new wave than classic rock," Ruppenthal says about those days. Esquith, who spent time in West Africa with the Peace Corps, returned from his time abroad with a deep appreciation of that region's music. "If you listen to Sam singing "This Rising Tide" on the new album, you'll hear it's got a sort of afro-pop vibe going through it, underneath the roar of the rock & roll," says Elderkin. Each member of The Public Good has been in bands before, but they agree that this is the best band experience for each of them. Elderkin and Ruppenthal, who've played together on and off since their high school days, agree that the teamwork and complimentary talents of each member sets this group apart. "The songwriting is much more collaborative now," notes Ruppenthal. "In this band we're trying to branch out and get everybody's opinion." In addition to this new way of working, The Public Good has also learned the lesson of sticking to it's guns and not giving up -- even when things get tough. In the past, botched record deals and line-up issues weighed them down. "It used to be that we would get impatient and quit. And then we'd start again from scratch," says Ruppenthal. "We're in it for the long haul now." And the band has plenty to look forward to. 'A Varied Program of Stereo Dynamics for Your Wild Nights Alone', which was produced by Garges, promises to bring them a wider audience. "We love how the disc sounds, Chris did a great job guiding us, and so far we've been getting a very strong reaction," says Elderkin. In the meantime, they are playing gigs on the East Coast, blogging day-in-the-life-of-the-band updates on their entertaining site Public Privates, and are already writing songs for their next release, hoping for the best and doing the good work of The Public Good.

Here's what you say about
The Public Good - Varied Program of Stereo Dynamics for Your Wild Ni.