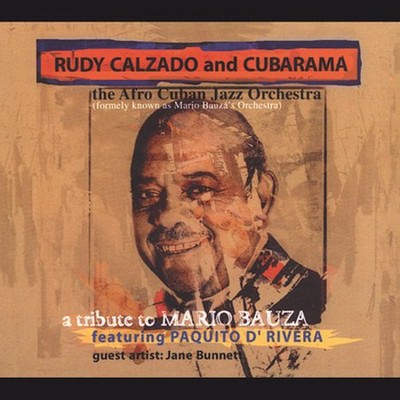 Versatile singer, percussionist, prolific composer, arranger, bandleader. He was one of the rare breed of singers, who was also an accomplished composer and arranger, and could ably apply himself in any Latin format or idiom. He made his professional debut in '47 with Pancho Portuondo's orchestra, featuring his cousin, the singer Fernando Alvarez (b 4 Nov. '28, Santiago de Cuba), who later worked with Beny Moré and Conjunto Casino. He relocated to Havana in '50, where he worked with the 18-piece Esteban Antunes band. Two years later he joined José Fajardo's All-Stars; performing with them at the Montmartre Cabaret. While with Fajardo (1919-2001), in '53 or '55 (accounts vary) cha cha cha creator Enrique Jorrín (1926-1987) invited Rudy to join his Mexico-based charanga group to help him promote his rhythm there. He toured widely with Jorrín's orchestra (as well as shuttled back and forth to Cuba) and recorded with them for RCA. Rudy remained in Mexico after Jorrín's return to Cuba, and from there he relocated to Chicago in '58 or '59 (again, accounts differ) to become a member of the charanga Orquesta Nuevo Ritmo de Cuba, which it's founder, Cuban conguero Armando Sánchez (1920-1997), claimed he organised in '51-2 (in an interview in Aché magazine, Spring '96). Personnel included other prominent names, such as vocalist Pellín Rodríguez (1926-1984), violinist Pupi Legarreta, flautist Rolando Lozano, timbalero Cuco Martínez, pianist René 'El Latigo' Hernández and bassist Victor Venegas. With Nuevo Ritmo, Rudy made his performing debut in NYC at the legendary Palladium Ballroom, played in Puerto Rico and accompanied Celia Cruz at California's Hollywood Palladium. Johnny Pacheco saw Rudy perform with Nuevo Ritmo in NYC and hired him to sing with Elliot Romero (d '90) in his newly formed charanga, which made the first ever album, Pacheco y su Charanga Vol. I '60, on the Alegre label founded in '56 by Al Santiago (1932-1996). The record was a best seller and contained the Feb. '61 Farándula NYC chart topper 'El Güiro De Macorina'. Rudy sang on Pacheco's next two Alegre volumes, Pacheco y su Charanga Vol. II '61 and Pacheco y su Charanga Vol. III: Que Suene La Flauta '62, as well as on Las Charangas - Pacheco, Palmieri, Fajardo '61 on Alegre, also featuring the charangas of Charlie Palmieri and Fajardo. Mongo Santamaría took over the reins of leadership, adding violinist/tenor saxophonist Jose 'Chombo' Silva (1913-1995) and timbalero Willie Bobo (1934-1983). He had the distinction of working and recording with NYC's entire trinity of Mambo Kings: Machito, Tito Puente and Tito Rodríguez. No doubt assisted by the Buena Vista Social Club phenomenon, his solo career underwent somewhat of a renaissance at the beginning of the new millennium. Back in the USA, he sessioned on Cuban Masters; Los Originales '02 on Pimienta Records by the Cuban Masters, an all-star ensemble directed by trombonist Juan Pablo Torres, featuring Fajardo, bassist Cachao, trumpeter Alfredo 'Chocolate' Armenteros, conguero Carlos 'Patato' Valdez, pianists Alfredo Valdés Jr. and Alfredo Rodríguez, sonero Héctor Casanova and 10 others. In addition to recording Los Originales in Hialeah, Miami, the Cuban Masters gave 2 concerts at the James L. Knight International Center in Downtown Miami. In '02 Rudy was hospitalised with diabetes. His leg became infected and was amputated. He died the next day. In today's Cuba, Rudy's nephew, timba master David Calzado, directs Charanga Habanera and another nephew, Manolo, is a member of La Charanga Forever.

Here's what you say about
Rudy Calzado - Rudy Calzado: A Tribute to Mario Bauza.