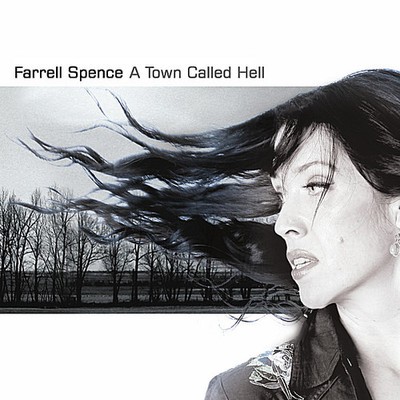 Farrell Spence is a Canadian singer and songwriter. Her debut album, A Town Called Hell, was released in 2007. The album is a collection of Americana/Folk ballads and lullabies delivered with ghostly, heart-wrenching beauty. Farrell's smoky, mournful vocalizations and guitar work continue a long-standing tradition of soulful Canadian balladry and guitar stylings inspired by The Cowboy Junkies and Neil Young. Her lyrics are poetic and honest, woven into songs which hit like a blast of deja-vu creating a haunting sensation that lingers in the listener long after the final chords have been struck. Each track on A Town Called Hell is autobiographical, summoning the eccentric and tragic characters from Farrell's own past -- plunging into a sticky web of loves lost and found, this is a soundscape of secrets, triumphs and tragedies that is sure to hit hard for anyone who has ever been in love. These 10 songs are a gallery of tragic portraits: entwined lovers, aching hearts, hopeless drunks and hopeful n'er-do-wells... all sung from the perspective of a woman unafraid of days past. Amidst a world of over-produced and heavily layered albums, Farrell Spence's debut album is an undeniable standout -- confident and emotional, shadowed but hopeful. Each lyric sung and every key struck is worth it's weight in whiskey. Notable tracks on the album are 'Losing You Again', a track Farrell co-wrote with her mother, 'Here's To You and Me', a poignant duet with Rob Bracken of Vancouver's Brickhouse, and a striking interpretation of 2005 Americana Award Winner Mary Gauthier's 'I Drink'. Farrell performs live regularly in her hometown of Vancouver and in Ireland, where she currently resides. In 2008 she also joined Trish Klein and Frazey Ford of The Be Good Tanyas and Simon Kendall of Doug and The Slugs for a live gospel show to benefit the Greater Vancouver Food Bank. Two of Farrell's songs, written previous to A Town Called Hell, have been placed on 'THE CHRIS ISAAK SHOW' and she can be heard on regular airplay on CBC Radio in Canada, RTE in Ireland, BBC in the UK and a myriad of college and independent radio stations in the USA and Canada. Farrell Spence's CDs are distributed by CD Baby in the USA. Her CDs can also be purchased on iTunes. In the UK and EUROPE, publicity inquiries directed to: G Promo PR UK/European Press & Radio Contact: Geraint Jones / Deb Jones Phone: + 44 (0) 1691 622356 Mobile: + 44 (0) 7855 724798 [email protected]

Here's what you say about
Farrell Spence - Town Called Hell.