School for the Dead - Telephone Built for Two 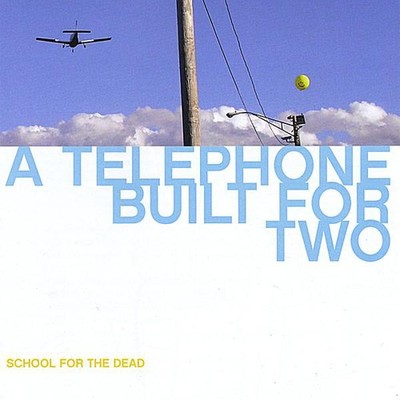 "School for the Dead" is perhaps the most misleading name for a band since the days of that hedonistically bombastic hard rock group from the '70s known as April Wine. Except, rather than a moniker conjuring flowery romantic notions only to have the listener assaulted with the brash swagger of a band who once named one of their albums (this time, appropriately) "Harder...Faster," School for the Dead is sitting on the other side of the playground. Rather than commiserating along the rusty hulk of a dilapidated urban schoolyard fence among the malevolent adolescents with their boom-boxes, denim, long faces and Kelly Leak-like attitude, School for the Dead are too busy perched atop a shiny jungle-gym surrounded by chirping schoolchildren, green grass, and the effervescent scent of jonquils prancing on the breeze. Well, yes and no. Singer-songwriter-bandleader Henning Ohlenbusch at one point wonders aloud on "A Telephone Built For Two," the group's sophomore set, "Why don't I feel the way I should?" but the question is posed while a cascading swirl of background harmonies and sumptuous synths support the ache in the melody with a comforting embrace. Similarly, when Ohlenbusch opines that "Last night, I had the most boring dream," the rhythm section meanwhile careens along like one of those trains in the final minutes of a classic Alfred Hitchcock thriller. Moreover, the despondent suicidal characters inhabiting "Disgruntled Lover" cannot dance the emo-a-go-go but instead have their tales of woe delivered by Ken Maiuri's plucky banjo, Tony Westcott's shimmery surf-guitar splashes, and a boot-stompin' hoedown courtesy of tasty bassist Max Germer and crackerjack trapsman Brian Marchese, not to mention Henning Ohlenbusch's sardonic familiar croon. This album is a delightful tapestry of the human spirit, a sumptuous curry where coriander and cumin combine, turmeric tangoes with tarragon and a sprinkle of cinnamon simmers atop a garlicky, gingery gumbo, musically speaking. Simply put, "A Telephone Built For Two" has something for everyone.

Here's what you say about
School for the Dead - Telephone Built for Two.