Set on Edge - Story to Cling to 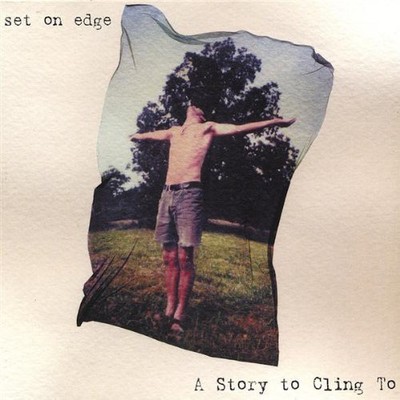 Set on Edge is the musical project of songwriter/producer/vocalist/guitarist Shannon Lewis. Founded on the campus of Ohio University with co-writer Steve Rieske (and original members Randy Kinsey and Dave McCall), Shannon's most recent line-up is more fluid. Noted for strong vocals and passionate live performances, in Set on Edge's music hope is seen through the eyes of sadness, and faith through the clouds of doubt and questioning - in the end joy still breaks through. A Story to Cling to showcases the talents of Pat Strawser (formerly of Rock-n-Roll Summer, Volare, Atomic Cafe, & Spoon River), Brittnye Norris Alden (formerly of Nye, & Pedestrian), Patrick Davis (of Duke Davis, formerly of Jasper Gate), Emily Beam (also appears with Jessica Fore & Derick McTavish), Steve Grubbs (formerly of the Breakheart Beat), Andy Womack (formerly of Trilobite Cafe), Andrew Thurston (formerly of Atomic Cafe), Drew Lawson (formerly of Red Letter Blonde), and Daniel Claason (formerly of Mobway and Vigilantes of Love). Other than 'A Story to Cling To', Set on Edge has released 'Autumn Song' and 'Sod Pottage' (both are currently out of print), and is slowly working on a 4th in his home studio - it is tentatively entitled 'Sleeper/Healer'. Shannon is also currently working on recording with his new band, Saint Lewis. From Splendid E-zine; 'Set on Edge isn't a Christian band per se... The songs on A Story to Cling To...fit better into the nebulous category of 'spiritual'. There's no aggressive proselytizing, no in-your-face testaments to the power of the Lord. Nevertheless, it's quite obvious that the lyrics are coming from a religious place. Lewis has a strong, expressive voice ...his technique generally blends well with the discreet yet ornate arrangements of guitars, strings and organs behind him. However, the EP's standout track doesn't even have vocals; 'To the Woman Whose Husband Will Never Come Home' is a lingeringly melancholy piano piece. The variety of instruments in the music, as well as it's vulnerable optimism, will give you the odd impression that you're watching a full-band concert on PBS and participating in an acoustic-guitar jam around the campfire at the same time. ...This music expresses Christianity the way it seems like it's supposed to be: not as the religion of Sunday-afternoon ten-percent tippers and judgmental politicians, but as the quiet joy of belief in God.' - Sarah Zachrich From Ink 19: 'Expansive folk pop performed with the unassuming air of a loose jam session among friends, Set On Edge come across like a male-fronted cross between Tracy Chapman and New Bohemians, with a slight glance in the direction of R.E.M. Front guy, vocalist, prime songwriter and producer Shannon Lewis sings with beautifully constrained passion, and the band's strength is the strong interplay between musicians, the respect and understanding they show for the music they make. ...at the center of the band's panoramic sound, lies some truly outstanding melodies.' - Stein Haukland From Phantom Tollbooth; 'If A Story to Cling To is any measure of their potential, Set On Edge are growing up to become gentle giants. ... I must warn those of my psychologist colleagues who specialize in patients who suffer from anxiety-related conditions. If this EP ever reaches your neck of the woods, and your patients happen to get their hands on it, you may eventually lose them as steady customers. ... It contains more cushion than a Freudian couch, and more healing power than seven shrinkin' Sigmunds. ... Though finding the core band members may prove as an elusive undertaking...one thing is clear, songwriter/producer/vocalist/guitarist Shannon Lewis is the Magi in the magic. He has the gifts of at least three wise men...His voice is pristine, passionate, powerful and peaceful. It is harnessed by a trained ear, but emancipated by a heart that pines to draw forever nearer to the fountain of God's grace. ... Each added member's touch reflects protean capabilities. These are obviously extraordinarily talented, hand-picked musicians. Each arrangement is well executed and extraordinarily orchestrated. The magic in _A Story to Cling To_ is made complete by the deft drums of Andy Womack. He doesn't miss a beat and he's got bursting bundles of energy to boot. Andrew Thurston's 7 string bass on 'Story' and 'The Weaker David' show signs of Herculean strength. Drew Lawson of Red Letter Blonde fills in with fecundity on his fretless bass on 'Summertime,' a live, bonus track. Steve Rieske's backing vocals on 'Story' smoothly and seamlessly ally with Lewis' lead vocals. Together they are bound to win battle for the heart and soul of every listener. Every trace of Patrick Davis' lead electric and acoustic guitar arrangements puts a graceful face on this musically told story, and beckon the listener to cling tightly to each strum and run. Emily Beam's cellos combine with Daniel Claason's violas to add a comforting, if hauntingly melancholic dimension to the EP's low-key story line. ... Lyrically speaking, 'The Weaker David' is the strongest link -- thanks, in part, to it's soul source of inspiration, Dr. Larry Crabb's book, _The Silence of Adam_. The rest of the songs flow like prayerful poems, each telling stories of their own. Each song reveals an abiding intimacy between a devoted, if spiritually depleted, disciple and God, the divine source and open-armed recipient of his devotion. It has been said that every picture tells a story. Though this picture is still in the works, it foreshadows an auspicious, burgeoning tale of triumph.' - Bruce Theissen.

Here's what you say about
Set on Edge - Story to Cling to.