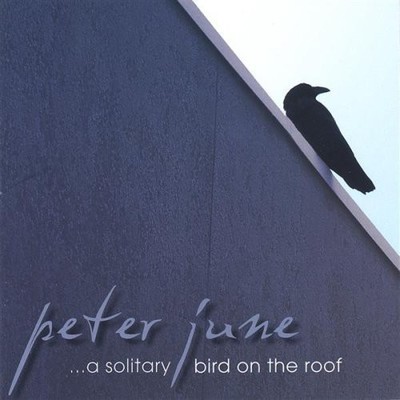 Recipe for a debut album: 1 bleeding heart, 1 Guild guitar, 1 lost love. Bake in a G4 Power Mac for 6 months and burn to disc. Serve stirred, not shaken. Peter June has all the elements of a singer/songwriter: he writes songs and he sings them. As an added bonus, some people really like them. It is with this buoyed confidence that he brings his music to the masses with his first record on May 4, 2005. A New England native and current Bostonian, June, 23, is acutely aware of his status in that awkward space between the safe boundaries of college life and the risky freedom of 'the real world.' His debut album, '...a solitary bird on the roof', is a collection of songs stemming from a broken relationship and a wrestling match with the elusive 'why' that ensued. To say the album is vulnerable is akin to saying Mikey 'kind of likes' Life cereal. But rather than being egocentric, the songs are surprisingly hopeful and outwardly focused, inviting the listener to relate on a personal level. Peter notes, 'There's something very mysterious about vulnerability put into a song - it's the honesty that attracts people and provides a common ground to say, 'Yeah, I'm right there with you.'' June strives for that connection through his live performances. With a passionate vocal delivery reminiscent of Bono and Adam Duritz (Counting Crows), no song ever sounds the same twice - it's an experience all it's own. The backbone of this relational approach is a strong faith. 'I grew up in a spiritual context, and some of the first music I can recall is the old gospel tunes sung on a Sunday morning. What struck me was the music's ability to strip the sociological barriers that exist between young and old, rich and poor, black and white - and for 5 minutes give you a taste of heaven. That's what I'm after.' If finding common ground is the goal, Peter's loftiest aim can be summed up in his own words: 'If I can get a subway car full of strangers singing the same song, then I can take over the world.' -------- pete's thoughts on the album: for me, 'solitary bird' serves as a milestone and a memorial to record the events, but more specifically the emotions marking a period of time. My goal was to create a cohesive auditory 'photo album' through which i could thumb on a rainy-day of recollection, or share with others in an exchange of life-lessons learned. Regardless of whether our memories are joyous or somber, so long as they are recounted with accuracy, they can provide a lamp to light for our future choices. My hope is that this project will provide a porchlight of comfort for my fellow travelers making their way through the night into the dawn. -pete, April 2005.

Here's what you say about
Peter June - Solitary Bird on the Roof.