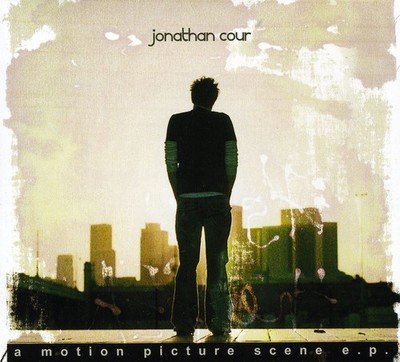 Jonathan Cour - Bio Jonathan Cour is a 21-year old young singer/songwriter based in St. Louis, Missouri. The son of a music teacher, Jonathan's first musical endeavors were in high school as a drummer for various local bands. In college, Jonathan stepped out from behind the drums, picked up a guitar, and started writing his own songs. Based on the buzz created by his early demos, Jonathan soon found himself traveling across the country to Los Angeles, Nashville, and Tulsa to write and record with some of the music industry's hottest producers and most decorated songwriters, including Desmond Child ("Livin' on a Prayer," "Dude Looks Like a Lady," "Kiss the Rain"), Annie Roboff ("This Kiss"), and Zac Maloy of The Nixons ("Sister"). Jonathan's debut EP, A Motion Picture Scene, is the impressive first result of his travels and efforts, as well as a testament to Jonathan's natural strengths as a songwriter, singer, musician, and producer. In addition to writing or co-writing five of the six songs on the EP, Jonathan sings all the lead and background vocals himself and plays almost all of the multi-layered guitars and other instrumentation. Whether on the ethereal, yet explosive "Never Come Around," the heavy groove layered "Softer," or the driving title track, Jonathan demonstrates throughout A Motion Picture Scene an ability to play just the right part, with just the right tone, to capture and complement the diverse moods and rhythms of each of his different songs. Jonathan's talents extend beyond the recording studio. Backed by a who's who of St. Louis' best independent musicians, Jonathan's live performances are quickly becoming the talk of the town. Each member of Jonathan's band - Grant Essig of Sevenstar (guitar, keyboards, vocals), Matt Hickenbotham of Colony (drums, vocals), Mike Steimel of Just Add Water (bass, vocals), and Dave Alans of Lord Baltimore (lead guitar, vocals) - was handpicked to help Jonathan match live the lush and full production he created for A Motion Picture Scene. Assisted by their talents and experience, Jonathan not only meets this daunting challenge, but takes it up a notch - offering each night an exciting and emotional interpretation of his songs without taking away from the melodies and structure that make them so accessible to the general public. Jonathan is managed by Richard LaBonté for LaBonté Music Management. Contact: [email protected] for more information.