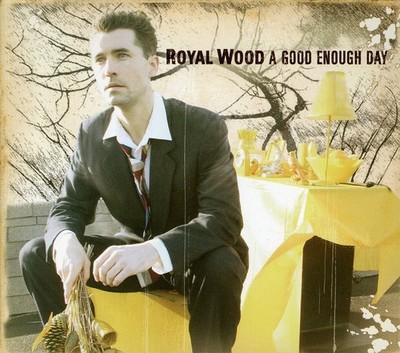 On Jan 30th 2007, Royal Wood and Dead Daisy Records/Outside Music will unleash A Good Enough Day, Royalâ€™s follow up to 2004â€™s critically acclaimed Tall Tales (MapleNationwide/Universal Music). Carefully writing, performing and producing the effort, Royal decided to have a few guest musicians sit in, including well-known Toronto musicians Hawksley Workman, Kurt Swinghammer, Harmony Trowbridge and Kevin Fox. With the new record due out soon, his music in the hands of fans, successful performances at major festivals and venues, including a tour with Canadian songstress Sarah Harmer, Royal Wood is an artist whose time is at hand to be heard. Royalâ€™s music has been featured on several TV and movie soundtracks; including the HBO series Regenisis, the CBC series This is Wonderland, the CTV movie Playing House, the film The End of Silence starring Sarah Harmer, and the Warner Music Canada soundtrack to the Food Networkâ€™s The Surreal Gourmet (with other artists including Feist, Tom Waits, The Flaming Lips, Moby, Aretha Franklin) and more. His self-written, performed and produced releases The Milkweed EP (2003) and Tall Tales (2004) have garnered critical praise: The album (Tall Tales) drifts from sad pastoral laments to capering piano pop jubilance with an effortlessness that is truly staggering. Vocally and lyrically, Wood comes surprisingly close to Aimee Mann's stomping grounds, with glancing blows at Ron Sexsmith's tenebrous pipes and brand of song craft. But Wood is his own man, his own voice, and the sincerity of his words can't be blamed on anyone but him. NOW MAGAZINE Beginning on the piano at the age of four, Royal became a multi-instrumentalist by his early teens. In fact, any instrument he could get his hands on was explored and devoured. His school's music program had a sign-out policy for any instrument smaller than the tympani - and they all found their way home to his bedroom. Even the drums came home for the summer months. Fast-forward to today, and you will find Royal performing major events like Hillside Music Festival, Canadian Music Week, North by Northeast, Halifax Pop Explosion, Bluebird North and more; as well as sharing the stage with the likes of Sarah Harmer, My Morning Jacket, Sarah Slean, Peter Elkas, Danny Michel, Serena Ryder, Dan Bern, Justin Rutledge, Lindy, Jill and Matt Barber, Emm Gryner, Erin McKowen and more.

Here's what you say about
Royal Wood - Good Enough Day.