The Preakness - Class Act in a Bad Situation 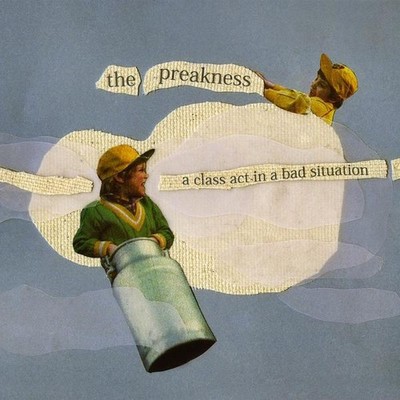 Despite the fact that the band shares it's name with a 134-year-old horse race, The Preakness can trace it's genesis to the 21st century technology of Myspace. Guitarist Brandon Arnold began posting homemade four-track recordings on the ubiquitous portal in 2005, eventually catching the attention of bassist Tracy Clark, who felt that her sense of harmony would be the perfect foil for Arnold's subtle pop melodies. The band finally came to fruition in early 2006 in Atlanta, when Arnold (ex-Licentious 5) and drummer Tim Genius (ex-Bon Vivants) were winding down from other projects. Arnold re-connected with Clark, who was already playing in Silent Kids and the Blue Hour, and The Preakness was born. The potential of Arnold's early demos, and what Clark saw in them, became apparent right away, as lo-fi four-track charm gave way to explosive jangly pop, reminiscent of 80's and 90's college radio staples like Let's Active, Sebadoh, Superchunk, and Yo La Tengo. Playing it's first live show in April 2006, The Preakness became an instant attraction in Atlanta. The band would go on to play such festivals as Corndog-o-rama, The Other Sound Festival, and the Paste Rock and Reel Festival later that year. The band recorded an EP's worth of material with Matt Glagola engineering (Glagola would later join the band as it's drummer in 2009). Four of those songs made their way onto a 7" EP, Demons, which was released on the Eskimo Kiss imprint in 2007. The Preakness enlisted pop savant Jason NeSmith to engineer it's full-length debut. Recorded in early 2008 at NeSmith's Bel Air Studios in Athens, A Class Act fulfills the promise of the Demons EP and the rave reviews of those early shows. As described by Creative Loafing: "Each song condenses epic emotions into short vignettes brimming with metaphor and jangling emotions." "What They're Saying," "I Thought I Was in Control," and "On the Couch" all previously released on the EP, find their way onto A Class Act. Also included is a cover of Smog's "A Hit." The band stays active in the Atlanta scene by playing in other side projects, though The Preakness remains the band's primary focus. Arnold now plays bass in Silent Kids, which coincidentally was one of Clark's gigs before joining The Preakness. Arnold also plays with the Liverhearts, as does Glagola. Clark currently also lends her talent as a multi-instrumentalist to Mary O. Harrison and the Tiny Tears.

Here's what you say about
The Preakness - Class Act in a Bad Situation.