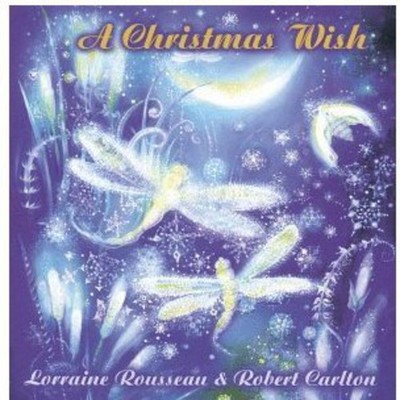 A Christmas Wish has a very unique contemporary sound that features our own original arrangements. After hearing our first CD, It's a Mystery, many of our customers commented that it had such a 'unique sound'. They requested that they would love to have a Christmas CD with a similar style of instrumental music. So we have created a soothing collection of your favorite holiday classics that feature the melodic sound of flute and guitar with an acoustic ensemble. For Lorraine Rousseau & Robert Carlton, music has always been a way of life. As husband and wife, they have devoted their lives to composing, performing and recording original instrumental music that is uniquely their own. From their classically trained backgrounds, Rousseau & Carlton create music that showcases the melodic artistry of Lorraine on flute and Robert on guitar accompanied by their world-class acoustic ensemble. Rousseau & Carlton blend classical, smooth jazz, new age, folk and pop influences to create a unique musical style. Lorraine Rousseau & Robert Carlton have created four critically acclaimed instrumental CDs: It's a Mystery, A Christmas Wish, Acoustic Café and Visionary World.Receiving extensive radio airplay across North America and Europe, Rousseau & Carlton have struck a chord with listeners by creating timeless, lyrical melodies. In the fall of 2003, Rousseau & Carlton and their artist-owned label, Arrow Records, signed a licensing deal with North Star Records, (Rhode Island, U.S.A) for their CDs - Acoustic Café and A Christmas Wish with Acoustic Café launching North Star Records new series - Melodic Moods. Maintaining an active touring schedule, Rousseau & Carlton have built a large fan base that is continuing to grow across North America and beyond. Rousseau & Carlton are now poised for even greater recognition with their newest release, Visionary World.. Now living in the Ontario countryside, Lorraine and Robert have many other interests that include: organic gardening (vegetables and flowers), swimming, bicycling, hiking, meditating, skating, tobogganing, trail blazing, art, reading, photography, computers...

Here's what you say about
Lorraine Rousseau - Christmas Wish.