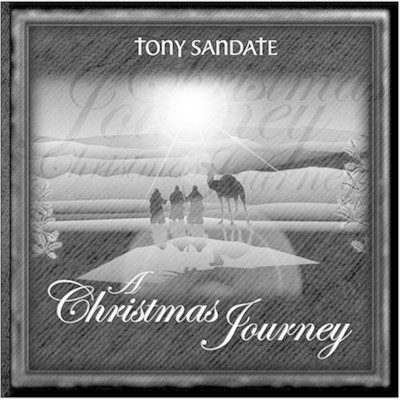 Tony Sandate was born on October 25, 1954 in Los Angeles, California. He exhibited musical interest at a young age, but did not begin to play an instrument until his junior year in high school. Upon hearing a recording of the great classical guitarist Andres Segovia on the radio, Tony decided to teach himself guitar. Upon high school graduation, he was urged by his parents to pursue a practical course of study, so he began studying air conditioning and refrigeration. He earned an Associate of Arts degree and started a career in appliance repair. But Tony continued teaching himself guitar, amassing quite a collection of classical, jazz, and finger-picking guitar records. This essentially made up his musical education. He would carefully read the album liner notes, look up all the musical terms, then try to learn the songs directly from the recordings. In 1981, Tony took his first guitar lessons with John Lockhart, a local classical guitar and voice teacher. After about a year he studied with Anisa Angarola, a founding member of the Los Angeles Guitar Quartet (LAGQ). Eventually, he spent a semester at El Camino Community College studying with another member of LAGQ-John Dearman. He also took jazz improvisation classes at El Camino Community College with Dr. Thomas Owens. Tony began to perform and record with various types of ensembles, playing his classical guitar or his Gibson Les Paul. He also became active in music ministry, performing and composing music for various churches in the Los Angeles area. In 1993, he was invited to perform with the Hispanic youth choir El Coro De Los Angeles at World Youth Day in Denver, Colorado. Later that year he was asked to compose and perform incidental music for various theatre productions, including the Morgan-Wixson Theatre production of A Soldier's Play. In 2002, he was invited to join the Russian folk sextet, Balanova. Tony added jazz and world music pieces to their repertoire, including his arrangement of James Brown's 'I Got You.' They have performed at the Getty Center and at other venues in the Southern California area. In 2000, Tony met pianist/producer Eric McCarl. Eric had plans to build a recording studio and start his own music label. Three years later, with everything in place, Tony recorded his first solo guitar CD, Sunset Meditation, at Eric's Olive Tree Studio. Though Tony has continued with his regular job in appliance repair, he still tries to make time for his various musical activities. He especially enjoys playing music with his two children. His daughter, Alba, plays piano and is studying music at El Camino Community College. His son, Andres, who was born with Down's Syndrome, is in high school. He enjoys singing and strumming on Dad's guitar. They are both inspirations for much of Tony's music.

Here's what you say about
Tony Sandate - Christmas Journey.