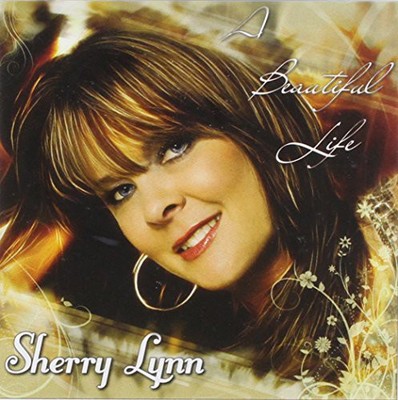 For Sherry Lynn, A Beautiful Life is more than her sophomore album; it's her view of the world. The title cut, a duet with Grammy-winning superstar Crystal Gayle, backs it up: Life is short, so jump in with both feet, chase your dreams, hold fast and relish the ride. That's exactly what Sherry has been doing since she transitioned from the Karaoke stage to opening in 2006 for Sammy Kershaw at Pitman, New Jersey's historic Broadway Theatre. Fast-forward two years, when Sherry was invited back to the Broadway to open for Crystal Gayle, one of Sherry's musical heroes. The concert turned out to be a pivotal moment in Sherry's career. It was one of those freeze-frame moments for Sherry. As a child, she'd set her career compass to singing the same day she watched Loretta Lynn's biopic Coal Miner's Daughter. And now there she was opening for Loretta's sister. In 2011 Sherry was delighted when Crystal agreed to lend her vocals to a song on Sherry's up and coming CD which was then put on hold while the perfect song was found. In December of 2012 Beautiful Life, a song co-penned by award-winning tunesmith Danny Wells, best known for George Strait's Check Yes Or No and Rascal Flatts' These Days. Sherry and Crystal joined voices at Crystal's studio, Audio 51, with producer Ted Hewitt, the studio wizard behind Rodney Atkins' string of Number One hits. Crystal's son Christos Gatzimos engineered the session. To choose the nine other tunes on A Beautiful Life, Sherry turned to stellar songwriters like Kelley Lovelace, who co-penned Girls Will Be Girls and eight Brad Paisley Number Ones; ASCAP 2009 Songwriter of the Year Ashley Gorley, who took Carrie Underwood to the top with All-American Girl and Good Girl; Edward Monroe Hill, another George Strait hitmaker, and Karyn Rochelle noted for writing Trisha Yearwood's This Is Me You're Talking To, and Kelly Pickler's hits I Wonder and Red High Heels. Whether Sherry's sneaking a peek at the hottie next door in I Like 'Em Like That, embracing love in I Could Get Used To This, or blowing off heartbreak in Slip Into Something Mexico and What a Day To Shake a Heartache, Sherry keeps it upbeat and personal. When she ramps up the rowdy anthem Girls Will Be Girls and "points her taillights at yesterday" in So Much More, it's autobiographical. Pure Sherry Lynn and her Beautiful Life. Review: Digital Journal Rising country music singer Sherry Lynn released her new studio album 'A Beautiful Life.' It was produced by Ted Hewitt. Throughout her musical career, she has opened for such artists as Miranda Lambert, The Oak Ridge Boys, LeAnn Rimes, John Rich, Chris Young, Randy Houser, among others. She has also played on the Grand Ole Opry stage with iconic country songstress Crystal Gayle (Loretta Lynn's sister) and they sang their duet single. Her album opens with 'I Like 'Em Like That,' where her vocals are slightly reminiscent of Jennifer Nettles from the hit country duo Sugarland. It is followed by the rebellious 'Girls Will Be Girls,' which has a rock edge to it. 'Slip Into Something Mexico' has a laid-back vibe to it and 'What a Day To Shake a Heartache' is infectious and it would make a good choice for a future radio single. You in a Song' is another uplifting, catchy vocal and 'So Much More' is quite autobiographical and captivating. In 'What Are You Running From' and 'I Could Get Used to This,' the listener can easily recall country songstress Pam Tillis, which ought to be taken as a major compliment. 'Fallin' In Love' is another favorite track of mine. It closes with 'Beautiful Life,' a stunning collaboration with Crystal Gayle, who helps bring the song to a higher level. The Verdict It is so hard to criticize an album of this caliber, since all ten tracks on here are stellar. Sherry Lynn is certainly one of Nashville's finest female artists out there at the moment. It garners an A rating. By Markos Papadatos.

Here's what you say about
Sherry Lynn - Beautiful Life.