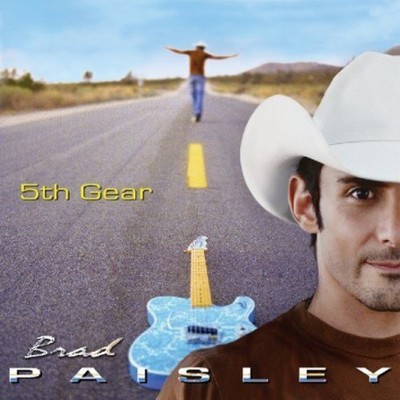 Like his friend Vince Gill, Brad Paisley has achieved the often-difficult feat of reconciling being an entertainer and world-class guitarist. He's proven that on four admirable albums, and 5th Gear follows in that vein. Certainly "Ticks," an airy, radio-friendly ditty, is not the true substance here. That comes with such superior fare as the insightful "All I Wanted Was a Car" and "Online," a sly satire of people's Web facades. While his duet with Carrie Underwood ("Oh Love") is a bit cut and dried, Paisley ably handles "Letter to Me," "It Did," and "Mr. Policeman," a 21st-century outrun-the-law tune. The closing hymn, "When We All Get to Heaven," and ripping instrumental "Throttleneck" are Paisley at his best. It's admirable that he invites his venerable buddies, Little Jimmy Dickens, George Jones, Vince Gill, and Bill Anderson, along with Dolly Parton, to join in, but the obligatory "Kung Pao Buckaroos" skit is wearing a bit thin. Better to feature them musically, the way he includes Dickens, Gill, and Anderson on "Bigger Fish to Fry." in a time where lines between county and pop are blurring far too much, it's comforting to know Paisley still realizes and respects the differences. -Rich Kienzle.

Here's what you say about
Brad Paisley - 5th Gear.