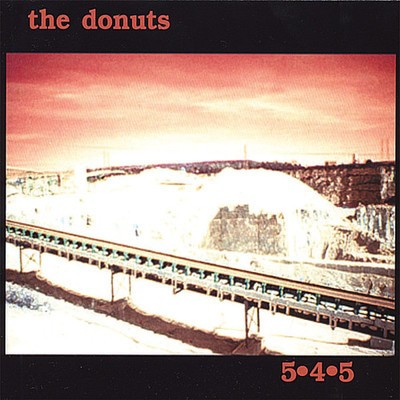 The DonutsTM Follow-Up Their Acclaimed Grammy® Nomination Nominated Album and Follow-up the Follow-up Two New Albums; One New Nut; Still No Fat Slo-Mo Turns On The Love Light You've read this far, you know the deal: Three years back Philadelphia's own Donuts dropped Sgt. Jack's Pepper Mill, the fastest-selling record in Chapter 7 Records' storied fifteen-year history; they followed quickly with the critically-acclaimed Buckley and struck soon again with The Monkey Wrench Gang. Payola checks couldn't bounce before the Nuts had earned their first, second and third Grammy® nomination nominations. And thus did the Kings of Pirate Radio rest? Did they let the trail go cold and cast comfortably about their footnote of near-achievement? Did they fill their rice bowls with rave reviews and simply decide to nap? You bet they did. The Donuts are shiftless and lazy, and laughed like lords while for eighteen months the world went wanting for the greasiest garage-born power-pop likely to be plugged in this press release. Entire babies came into being, Fathead drummed through his own puberty, and Dieter Affeschlusselgruppe - no relation to Andy Affeschlusselgruppe - cruised in to play keys. But fear not. The Nuts are back like a rash and rapt on catching the Doublemint twins with not one but two new records: Jet Ear, birthed in the studio and bound for glory, and 5-4-5, a twigs and seeds collection of outtakes, demos and the Nuts' debut EP unavailable 'til now outside of Japan. For the fourth and fifth times, Mike "Slo-Mo" Brenner sits in the producer's perch with wizardry so apt that it actually takes longer to play a Donuts record than it does to record one. And length matters to the Nuts: Jet Ear's thirteen bits of bad luck barely break a half-hour; 5-4-5 adds five more tracks and only seven minutes. The Nuts never bore us with a lot of so-called "music." "I think Jet Ear is our strongest work to date," says head blame-taker J. Bearclaw. "The first three records were great, but we had to satisfy a lot of outside demands - fans, press, and threats from our label. With Jet Ear, we made the record we knew we had in us." For the first time since their last album, the Donuts embrace the moment. They could have taken the obvious alt-rock avoid-the-obvious route. But the Nuts don't attend conventions and so go full-frontal on the war. Jet Ear's first single, "Guantanamo," is hardly some jive-ass aging-hipster fake wanna-be Cuban joint a 'la Ry Cooder. He didn't return calls. So the Nuts mix it up with mariachi horns, a marshal beat, words that rhyme, and a melody more sly than Rocky Balboa. "Justice In The Desert" moves right to the source: "Might makes right, boys, and that's the bottom line." The ponderous "Bethlehem" might have something to do with the war. Donuts words are rarely all that clear, but it's at least set in that part of the world. Unless it's about Pennsylvania. The Nuts carry the war to 5-4-5 with "The Sign Up": "Hey, kids sign up today/We're gonna take you away." This isn't just the usual Nuts kidnapping the kids again, or waxing poetic about child abuse. They do all that in "Little Teddy" and "Charlie One vs. Ruby Red." No, this is war. And wha-ut is it good for? About a half-dozen songs spread across both albums. After so long an absence the Donuts get right back on the bike and recycle. Fans will thrill to find all four tracks from the England's Newest Hitmakers EP in their entirety, in their original sequence, with absolutely no remastering or other value-add whatsoever. Relive "Reading Tea Leaves" just as you heard it on Pirate Radio. Forget about those expensive imports; you've got 5-4-5. "I think 5-4-5 is our strongest work to date," says head blame-taker J. Bearclaw. "The first four records were great, but we had to satisfy a lot of outside demands - fans, press, and threats from our label. With 5-4-5, we made the record we knew we had in us. Or at least below us, on the cutting room floor." Good things come in threes. You have two new Dounts albums to buy. The rest is up to you.