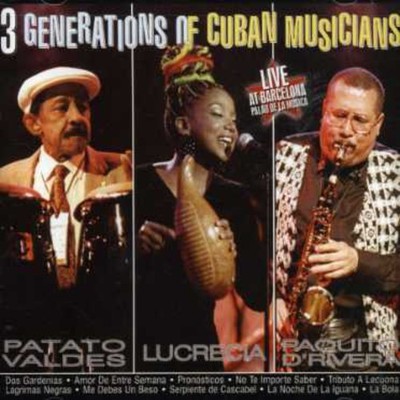 In this album, 3 generations of ace Cuban musicians get together for the first time in an unmatchable performance. Patato Valdes: Considered by some to be the greatest living Cuban conga player, Patato has played with Dizzy Gillespie, Art Blakey, Tito Puente, Machito, Mario Bauza, Quincy Jones and many other salsa and jazz stars. The first conguero to tune his congas to a song's dominant chord, Patato's influence was felt on the jazz and Latin music scenes and also in the world of film, where he gave Brigitte Bardot a mambo lesson in And God Created Woman. A New York resident since 1954, Patato's work was most recently collected in Six Degrees' The Legend Of Cuban Percussion, which featured Omar Sosa, John Santiago, Changuito, Orestes Vilato and other Cuban and African all-star performers. Lucrecia: Cuban tropical singer Lucrecia got involved in music while taking piano and singing classes at the age of seven. In 1987, the young musician was awarded in a local contest called Joseíto Fernandez. A year later, she received recognition for her songwriting and instrumentalist skills. Soon after, Lucrecia joined Anacoana, a famous local orchestra, singing and playing keyboards. During that length of time, the artist temporarily settled down in Barcelona, Spain. Paquito D'Rivera: Cuba-born and New York-based saxophonist and clarinet player, Paquito D'Rivera has balanced a career in Latin jazz with commissions as a classical composer and appearances with symphony orchestras. Classical New Jersey wrote, 'whether playing Bach or post-bop, D'Rivera's mastery of the instruments and their expressive capabilities is unquestionable'.

Here's what you say about
Patato, Lucrecia Y Paquito - 3 Generations of Cuban Musicians.