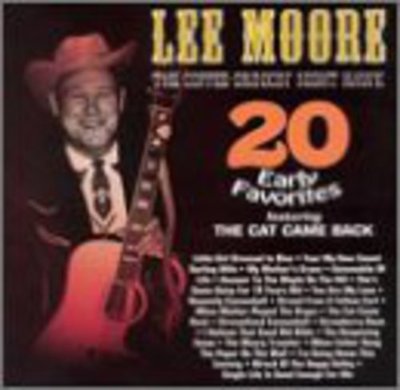 Lee Moore (The Coffee Drinking Night-Hawk) was one of the most influential and best-liked deejays in the history of country music. He was known for his laid-back, anecdotal recorded tunes. His taste for hard country music was reflected in both his emcee work and as a recording artist. Lee was born in Circleville, OH, September 24, 1914. He and his music were loved by a dedicated audience who listened to his all-night country music radio show (he was known as the Coffee Drinking Night-Hawk) on the huge 50, 000 watt WWVA in Wheeling, WV. The station was very popular among touring country and bluegrass artists, especially during the 1950 s and 60 s. This radio show, which aired at 2:00 am from 1953 to 1969, made him famous among insomniacs and all-night truckers all over the eastern United States. He influenced many people toward his music during these years through this show and through his recordings for various labels (with and without his wife, Juanita) including this one for Uncle Jim O Neal s Rural Rhythm Records in 1968 with the Blue Grass Cut-Ups as his backup band. This of course, was Red Smiley s band but Red wasn t on the recording. Even without Red, the Blue Grass Cut-Ups were still one of the finest band in the business. The Blue Grass Cut-Ups were Tater Tate (fiddle), Billy Edwards (5-String Banjo), John Palmer (Acoustic Bass) and Danny Milhon (Dobro Guitar). Moore s other Rural Rhythm recording Sings Radio Favorites of Country Music, was backed by the equally-talented Charlie Moore and Bill Napier. Among the tunes featured on this recording is The Cat Came Back, a very popular tune which, although somewhat dated by today s standards of modern bluegrass and country music, sold quite well back in 1953 when he began his recording career. Lee's radio show ended when the station changed it's format in 1969. He retired from the radio business but continued as a regular performer on WWVA s World s Original Jamboree until 1973. Barry R. Willis LEE MOORE Guitar, Lead Vocal BILLY EDWARDS 5-String Banjo CLARENCE TATER TATE Fiddle DANNY MILHON Dobro Guitar JOHN PALMER - Acoustic Bass

Here's what you say about
Lee Moore - 20 Early Country Favorites.