Natalie Illeana - 2 Sides of Me 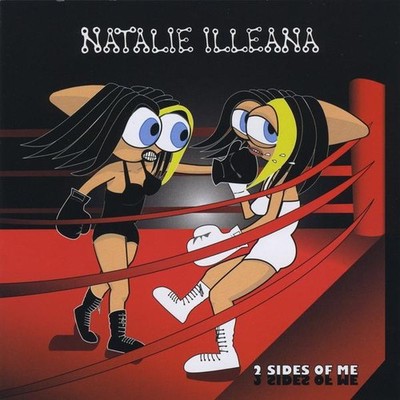 'Natalie Illeana takes different genres to form eclectic sound for 'Unbalanced' debut album' writes L. Kent Wolgamott of the Lincoln Journal Star. Taking instant notice of a smile-beaming California girl who recently settled in Lincoln, Nebraska. Wolgamott continues, 'Unbalanced is a 10-song CD that's a hard-to-pigeonhole mix of singer/songwriter pop, rock and even a little bit of country.' A melodic, pop/rock album packed with guitar hooks that get in your head and won't let you sleep. Illeana is an undeniably talented word smith who possesses true prominence in the music business. 'Unbalanced' was released on January 1st, 2007. '2 Sides of ME' was released August 21st, 2008. But if one must compare, Natalie Illeana and her band would best be described as Rilo Kiley meets the Rock-N-Roll heavyweights, The Supersuckers; hard-edged and catchy rock that is unambiguously softened by her tranquil,melodious voice and introspective lyrics. Writing songs at the age of 14, Natalie was raised an MTV child, coming into bloom when she and the world were swept up in the Nirvana revolution. In addition to the grunge icons from Seattle, bands like Weezer, Green Day, S.T.P. and The Rentals were coming into the light of the early 90's rock sound. They would shape her style and raise the bar for meritorious song writing, creating her own, 'Illeana Sound.' Living in Los Angeles in 2005, Natalie began working at a global satellite music provider called, DMX Music. It was there that she met Emmy nominated producer, Greg Kincheloe, who agreed to cut some demo's of her recent writings. Kincheloe, who recorded artists' such as Collective Soul, The Supersuckers, Tenacious D, Motorhead, Heart, Gene Simmons,Tracy Byrd, Big & Rich and Switchfoot to name a few, said that he had found a true 'diamond in the rough'. Instantly, they began on what would become Natalie Illeana's debut album, 'Unbalanced'. Soon after meeting, Illeana and Kincheloe would be laid off from DMX Music when they decided to relocate to the slower paced lifestyle of Kincheloe's native state, Nebraska. There, they would complete the recordings on their own Trax Studio label/production company, controlling all aspects of the recording including production, album art, web design and copywriting. A well balanced mixture of business woman and artist, Illeana also started her own,'Girl on the Bike Publishing' company and has proven to be an ambitious, self-contained music entity in control of her future.

Here's what you say about
Natalie Illeana - 2 Sides of Me.