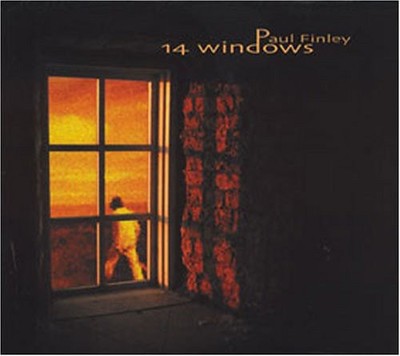 'It was July 14, 2002. Pennie and I were among the milling crowd waiting for Dave and Amy Nevland to emerge from the clutches of the wedding photographer when marvelous music began to sparkle in the air above our heads. I went in search and found it coming from a nearly invisible fellow sitting at the edge of the crowd. The late Ray Charles once said, 'The way I see it, we're actors, but musical ones. We're doing it with notes, and lyrics with notes, telling a story.' Ray Charles would have deeply loved the guitar of Paul Finley.' Like any other collection of instrumental music, 14 Windows is a series of poignant stories told in the language of notes and rhythms. But unlike any other collection, each of these 14 songs is preceded by a bonus track in which the artist shares with you the details of the moment that inspired the song. You'll hear, first in his own words and then through his guitar, this introverted young musician's delighted surprise when a beautiful young woman, Ginger, agrees to go on a date with him. You'll hear his thoughts and musical feelings about the little town in Wisconsin where he spent his childhood. And you'll hear his joy at the 50th anniversary celebration of his parents. You'll hear the colorful stories of 6 By The Pool, Valentine's Day, Out Of Body, Stillhouse Hollow and several other life experiences. A second breakthrough aspect of this CD is that Paul Finley pioneers in it a technique he calls 'melody strumming' that produces the effect of several guitars playing across, over and through each other. You'll find it hard to believe, but none of the songs on this CD were overdubbed with harmonies, melodies, or rhythmic accompaniment. Every bit of it is just one guy telling us fabulous stories through one amazing guitar.' - Roy H. Williams, executive producer Paul Finley's experience in music is as vast as it is colored. Born and raised in Waukesha, Wisconsin. A graduate and former faculty member of the Wisconsin Conservatory of Music. Playing guitar since age 12 and performing in bands soon after, Paul's first method of transporting his gear to band practice was his old red wagon. Today he tours internationally as the ground breaking Acoustic Spoken Groove ( Peter Nevland & Paul Finley) and Spoken Groove based in Austin, Texas. To date, they have recorded 4 CD's. Add to that Paul's 2 beautiful solo CD's 'A.D.' and '14 Windows'. Those found time on the airwaves of National Public Radio, K.U.T. Austin, KUMR Rolla MO, MIX 107 Stratford ON, KNLE Austin TX. A third CD is planned for 2006. Paul's unique 'melody strumming' creates the sound of multiple guitars from one instrument, giving live audiences a big charge. Performances have brought Peter & Paul to major conventions and festivals such as: Soul Survivor (England), Youth Specialties, Emergent Conventions, A.C. Radio Seminar, Icthus Festival, Pitch & Praise (Canada), opening for or appearing with the likes of Jars Of Clay, Lost & Found, Mercy Me, Amy Grant, Shaun Groves, Mitch McVicker, and David Crowder. Touring venues include colleges, bars, conventions, poetry slams, coffee houses, churches, prison, youth camps, schools, homes, even a classy Waffle House parking lot. Performing, recording and teaching began in the mid 1980's for Paul while he was still in high school. Austin has been his home since 1997. Projects there were of all shapes and sizes; so indicative of Austin's vast pool and variety of musicians. Appearing with the Austin Symphony Orchestra as a mandolinist, another of Paul's skills, lead to working with top collegiate orchestra The University Of Texas Wind Ensemble. The City Of Austin honored him on September 26, 2002 with Paul Finley day presented by the Mayor. Previous to Spoken Groove, Paul performed as a theater guitarist for Improv comedy troupes, in the Celtic group Glenn Glaz on guitar, mandolin, doumbek and tenor banjo, or Cajun band Bayou Beaujoulias, Alterna-Country mandolin with Miss Xanna Don't, choir ensembles, solo gigs, even cool kids performances. His music teaching continued at the Austin Guitar School and privately as well. His first serious band Mas Optica began in the mid 80's. This Inde-rock band had a 10 year history, totaling 7 releases/demos/compilations internationally and regionally on indie labels or on their own. Tours were in the American Midwest but unfortunately never to Europe, where press such as Kerrang!, Metal Hammer, and other 'zines and radio kept requesting more and helped them to develop a fan base overseas. Not busy enough, Paul also worked as a proofreader for music publishing giant Hal Leonard Inc. He also squeezed in a 3 week U.S. tour with a United Airlines trade show band. From '95 to '97 Paul lived in Phoenix, Arizona. This period began the use of his solo material in soundtracks, which continues today. Documentaries, commercials and promo videos have been produced for regional to international applications. Wrap up these skills and experiences with an inseparable love of the outdoors and bad jokes, it all comes out the hands of Paul Finley.

Here's what you say about
Paul Finley - 14 Windows.