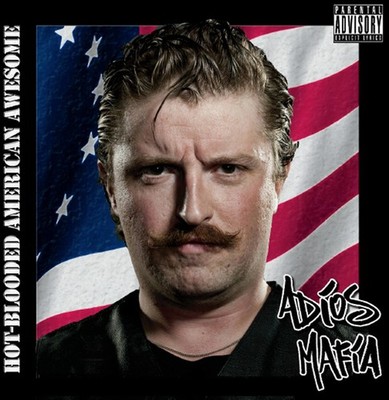 Adios Mafia is a ferocious rock n' roll band emerging from the forgotten enclave of Woodlawn in the Bronx, NYC, bordering the drinking capitol of Yonkers. There, 4 friends formed a musical gang, a brotherhood, a mafia, tired of PC-friendly rock music lacking the aggression and ingenuity the genre once had. Striking back with intensity and determination, their unapologetic persona has horrified a few, but has invigorated many more. While incorporating influences that range from the Ramones to Guns n' Roses to the Clash to Johnny Cash to Run DMC, they've blistered crowds in the Tri-state Area since their inception in July 2007. 'Hot-Blooded American Awesome' is their debut album. Clocking 13 tracks at 33 minutes, these guys aren't here to mince words or waste your time. Join them on a journey of twisted romance ('She Only Wants Me', 'Please, Sweetheart', 'Chick That's Gonna Stab Me') and rowdy rebellion ('Mean n' Dirty', 'Cause I'm a Man', 'Dirty Bomb'), that refuses to conform or apologize in the quest for awesome. Original, fast, quirky, and memorable. Welcome to the Mafia. "Not since the Ramones have I seen a band with a pure, badass American rock presence. Aside from this fact they also display a unique mixture of Punk Rock, Funk and Metal that melds together creating a sort of new kind of music that keeps true to it's influences. In a time and age when most new music is presented in some formulaic package, The Mafia simply comes out and does what any band should do when performing or making music, Rock your ass off!... " Eric Gonzalez - Ratt Fink Magazine "Apparently Adios Mafia believes we've forgotten what rock is supposed to sound like. Upon listening to a few of their tracks - spirited, loud, high energy - we sincerely appreciate the reminder." Lindsey Darden - Beatcrave.com.

Here's what you say about
Adios Mafia - Hot-Blooded American Awesome.