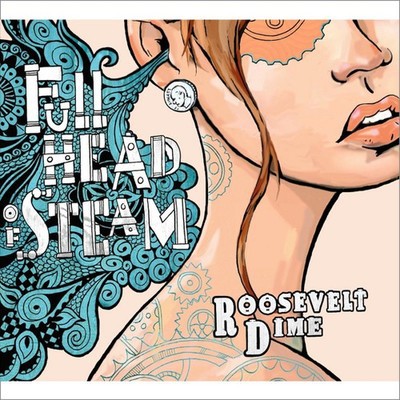 Roosevelt Dime is: Andrew Green: banjo, guitar, lead vox Eben Pariser: bass, bucket bass, lead vox Tony Montalbano: drums, backup vox Seth Paris: clarinet, saxophones, backup vox Full Head of Steam produced by: Eben Pariser -featuring- Punch Brother Chris 'Critter' Eldgridge: guitar, trks 1,3 Bruce Harris: trumpet, all trks Molly Venter and Red Molly: vocals, trk 3 David Farrell: piano/organ, trks 2,4,6,7,10,11 Sam Hoyt: trumpet, trks 5,11 Matt Mussellman: trombone, trks 9,11,12 Adam Chilenski: bass, trks 1,2,6,7 recorded and mixed by : Mitch Rackin, Seaside Lounge Studios mastered by: Eric Conn, Independent Mastering artwork: Jason Walz graphic design: Njoki Gitahi The success of this album would not be possible without an incredibly generous contribution from E.R. Pariser, and our Kickstarter backers. LINERS 1. Oh To Be: The original idea for the form came on the Staten Island ferry, and the original lyrics were all animal based: oh to be a bird in the sky, whale in the sea, fly on the wall, etc. The chorus of this co-write was finally hammered out over a glass of scotch on a summer afternoon. 2. Natchl Culmination A "sorry I'm not sorry" breakup song that tries to put things in a positive perspective. Written in part at the Body by Brooklyn spa in Clinton Hill, and inspired by The California Honeydrops. Bruce Harris contributes a killer horn arrangement. 3. Down On Your Luck Originally recorded for Steamboat Soul but never released, this song about an ambivalent relationship was re-recorded as a duet with Molly Venter for 'Full Head of Steam.' Red Molly makes a special guest appearance on the choruses. 4. Calvary Living in NYC, you can take a lot of the history that's under your feet for granted. After passing the enormous Calvary Cemetery countless times on the BQE, some light Googling yielded a whole album's worth of stories. The cemetery mirrors the city's size, expansion, and juxtaposition of wealth and poverty. 5. I Want Mo! This 'dangerously in love' song was written on the Q train, and the performance was honed in Union Square Station. The breakdown was added while on tour. Inspiration includes Taj Mahal, Jackie Wilson and The Isley Brothers. 6/7. Now There's You Another breakup song, this time about being freshly single after a long relationship and barely remembering who you are. The half-time breakdowns eventually led to a doo-wop vibe with the backup vocals, and ultimately the 'Barry Waits' voice over was born. With another terrific horn arrangement by Bruce Harris. 8. Cocaine Habit Blues A classic folk song we learned from the Memphis Jug Band which has since been re-popularized. Our version is built on a 'Bo-Diddley' beat and contains nods to The Grateful Dead and Taj Mahal. 9. St. James Infirmary A minimalist, wailing version of the New Orleans standard. This is a totally live take with no edits or overdubs of just the core quintet- banjo, drums, bucket-bass, trumpet and clarinet. 10. Crazy Bout You The delightful bop-inspired horn arrangement by Seth over bluegrass-style banjo is a classic Steamboat Soul sound. Eben was cajoled into getting progressively more drunk and 'crazy' on whiskey for his vocal takes as the song goes on. 11. Deep Elem Blues This folk song has always been a party-starter for the band and this version is no exception. Featuring double trumpets, a shout chorus that nearly comes off the rails, and an epic vocal performance. 12. Roosevelt Dime First written and performed in 2009 for the NYC record release for Crooked Roots, the band has finally captured a totally live and raw version of this old standby that's fit for mass consumption. It's meant as an introduction- both in name and in style.

Here's what you say about
Roosevelt Dime - Full Head of Steam.