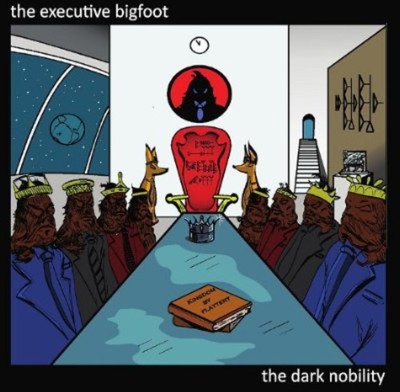 THE DARK NOBILITY - 2nd Release from The Executive Bigfoot When we set out to write and record a 2nd album we all agreed that we needed to 'step it up 10 notches' in every respect in order to make it worth our while. Please don't misunderstand - we are quite proud of '...Sesquac' and will continue to proudly represent it without apology or regret of any kind. We always knew, however, that this particular group of musicians - given our collective experience, versatility, skill, chemistry, healthy fun attitudes, mutual respect and trust, and patient yet persistent approach to musical projects - was capable of much, much more. I am proud to offer my opinion that with The Dark Nobility we have 'stepped it up' not 10, but at least 20 notches. We could not be more proud of this recording and know that it will appeal to metal fans everywhere. Thanks in large part to Sergio Chavez (Motorhead, Evanescence, Limp Bizkit, Avril Lavigne, Kelly Clarkson, Velvet Revolver, Brian McKnight, The Roots, Ladytron, Pennywise) who co-produced and engineered the album. We cannot overstate what a tremendous experience it was to work on this album as a group and with Sergio and the sense of fun and camaraderie that developed in the studio between all who were involved. If you like heavy metal, grindcore, death metal, speed metal, thrash metal, and really any good music that comes from the heart you are sure to like this album. ALBUM & GROUP CONCEPT The executive bigfoot is an umbrella term for a class of dark nobility in the earth. In both the celestial and terrestrial realms they are (lieutenants of) the primary enemy of all creation. In the terrestrial realm, however, they're ultimate status is rather obscured to most, such that they and their accomplishments generally appear beautiful and often correct. Their utility to the True King of realms (who ironically they seek to destroy) requires that they maintain their beautiful appearances and a worldy crown. Their designs and goals are only known to a select few among those who are not with them - a few who are not entirely immune to their workings but who will ultimately share in the victory over them. The executive bigfoot tells the tales of the dark nobilitys' exploits, their seductions, their fumblings, their whitewashed stupidity (they are stupid), and their ultimate destiny - to perish.

Here's what you say about
The Executive Bigfoot - Dark Nobility.