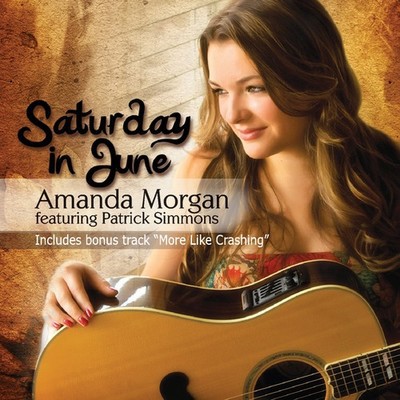 Award winning teen singer-songwriter and recording artist, Amanda Morgan has been generating buzz since she first picked up a guitar and belted. Born and raised in the Detroit area, she wrote her first song at ten and by fifteen had already recorded with Grammy winning producer, Fran Cathcart (The Les Paul Tribute Album 2005). That EP release, "Land of an Endless Sea," notched two "Number One" spots ("Just Wanna Know Why" and "Ten Steps Back") on WDVDfm's "Radio Café" indie poll and both numbers became "Most Requested Song in the State" in 2010 and 2011. Morgan was the youngest artist ever to achieve those accolades. In 2012, Morgan aligned with her second Grammy winning producer, David Feeny (Loretta Lynn & Jack White, 2004) and recorded her single, "Saturday in June." The track, an up-beat catchy rocker featured Doobie Brothers founding member and icon, Patrick Simmons on blistering lead guitar. Simmons said about Morgan, 'When I first heard about Amanda Morgan I was excited about this new young singer songwriter. When I finally heard her sing, my excitement turned to admiration and esteem. Amanda is the real thing! I've always thought songwriting and performing were the most important elements in the evolution of a popular musical artist. To find both of these things, plus an amazing voice, in an artist so young... well, this is what we're always hunting for." Morgan released the single with a bonus track ("More Like Crashing") in a limited edition disc. In April, 2012 Morgan was nominated in four categories for the "Indie Music Channel "awards. She was also honored to perform at the original "House of Blues," Los Angeles during the award ceremony. 2012 also brought Morgan's track "Ten Steps Back" to Delta Airlines In-Flight music programming and exposed her to more than two million potential listeners. Amanda Morgan continues to write and perform along with maintaining serious academic studies. In 2012 she was accepted into the W. P. Carey School of Business at Arizona State University where she pursues her Business Law degree as an extension of her music career. Morgan has appeared live on Fox TV, at Michigan's largest music festival, "Arts, Beats & Eats" and been featured in numerous online and print articles. Her music has been heard worldwide on terrestrial commercial, public and internet radio. "I have no illusions about how hard it is to make it in the music business today and how much work it takes," says the teen rising star. "For me writing and performing is my greatest passion and who I really am. I'm so fortunate that my music has already brought me so many amazing experiences and I can't wait to see what's next!"

Here's what you say about
Amanda Morgan - Saturday in June.