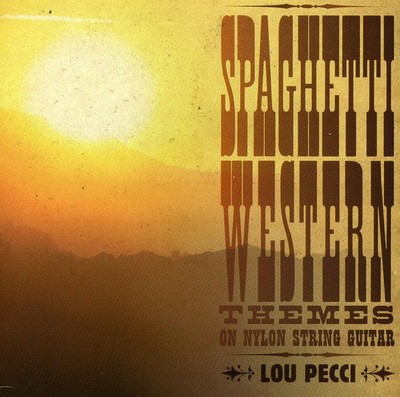 Internet notices: 1. '...this is a fantastic album...interpretations and arrangements are passionate, done with an obvious reverence and respect for the material, not to mention a great technique as well...a very successful endeavor...highly recommended.' - John Ryan, review at www.fistfulofpasta.com 2. '...his playing is uniformly flawless...touches provide hidden depth that encourage listeners to play the album start-to-finish, never mind over-n-over - an uncommon trait these days...an absorbing aural experience.' - AP McQuiddy, review at http://noircorral.blogspot.com/2012/03/six-strings-and-six-guns-lou-peccis.html 3. '... astonishingly subtle in the way he controls his sound and conveys his musical talent...will find frequent placement on your CD player.' Grady Harp, Amazon.com - review at http://www.amazon.com/Spaghetti-Western-Themes-String-Guitar/dp/B006MHZ9D8 (5 stars) 4. 'I've heard more horrible covers than I can count, and this ain't one of them. Very good choice of cues, and the style is such that they would have fit perfectly into the actual scores! My hat's off to you, Lou, for giving us a cover album that is miles above that which has done by even the biggest and the best. Bravo!' - John Nudge, Spaghetti Western Web Board 5. '...an album that brings together some of the best works of the genre...' - Ruben Franco, www.asturscore.com - Spanish website 6. 'The music is great. The first track is exceptional, after that you're hooked.' - M.J. Richards, Amazon.com (UK) 7. '...this guy is a very good musician ...skillful guitar playing...a very highly recommended set of re-interpretations.' - Leo Nikko, Amazon.com (Finland) 8. '...great collection of music played by a talented guitarist...' - Book Reader, Amazon.com (5 stars) 9. 'I am not usually one for 're-recordings' of soundtracks but sometimes the newer versions are so different from the originals that I am drawn to them. It's the case with this set of themes...a great way to hear some great new stuff ' - Alan Rogers, Twitter, North Wales, UK 10. '...wonderful' - Cricket 853, Film Score Monthly 11. 'WELL DONE !!' - Mike Bishop, Sam Peckinpah Fan Forum 12. 'Very nice renditions of great songs!' - Jonny M, Spaghetti Western Web Board 13. 'Great selection of themes, nice mix of styles, great job with the melodies/arrangements/overlays.' - Kerry Byrnes, SW fan - USA (e-mail) 14. 'I certainly hope this CD gets distributed and heard widely, it deserves to.' - Paul Hannon, SW fan - UK (e-mail) 15. 'Sometimes it gives a feeling of pure magic.' - Virender, SW fan - India (e-mail) 16. '...well arranged...soothing.' - http://ameblo.jp/alain-terence/day-20120417.html - Japan 17. 'Wow...nice work, I like it.' - Sargnagel, Film Maniax - Germany 18. 'It sounds great.' - Echoes, Dispara Gringo! - Chile Recorded with only an overdubbed electric nylon string guitar synthesizer (the synth used on the last track with a loop station), this CD was put together with an eye towards sequencing. The idea was to take a number of titles from different films, put them in the order of their release date (or close to it), and have them complement each other. While the Sergio Leone films are the best known in America, the others were all greatly popular in Italy and throughout Europe as well. Composer Ennio Morricone is represented eight times here (nine if you include the harmonica figure from 'Once Upon a Time in the West' borrowed for track 12, an original tune). The three remaining writers (Luis Enriquez Bacalov, Gian Piero Reverberi, and Marcello Giombini) are also important musical figures in the history of Spaghetti Westerns.