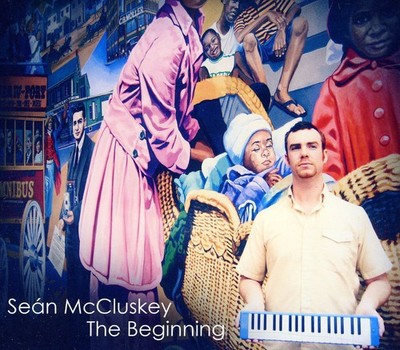 THE BEGINNING, the debut release of SEÁN MCCLUSKEY, marks the maturation of a jazz pianist whose playing "bubble(s) with originality" (Neil Tesser, Chicago Reader). A precocious student of music who played at the Kennedy Center at age 9, studied at the Brubeck Institute at 16, cracked the Chicago jazz scene with his first steady gig at 18, and has already appeared as a sideman on five releases, McCluskey isn't used to taking things slow. So why wait until age 26 to release his first date as a leader? "I wanted to make sure I had something to say," McCluskey offers. "Recent jazz history is littered with musicians who recorded too young and too often." THE BEGINNING would suggest that he's got plenty to say musically, as it features seven original compositions of eclectic influence. "France" was inspired by that nation's accordion music; "Frida agus Diego" is dedicated to Mexico's two most famous artists of the 20th century; "North & Wells" refers to an intersection in Chicago's Old Town neighborhood. This from a pianist who also manages to "evok[e] the likes of Herbie Hancock, Chick Corea, Bob James and Uri Caine without directly imitating any of them." (Dean Minderman, St. Louis Jazz Notes) While attending Northwestern University, McCluskey's first steady engagement was at age 18 at Chicago's Old Town staple O'Brien's with BluJazz recording artist JEFF HEDBERG ('The Summer Knows', 'Too Darn Hot'). After a run of 18 months at O'Brien's, Seán was discovered by Chicago guitar titan BOBBY BROOM (Deep Blue Organ Trio, Sonny Rollins), who often invited him to sit in at his steady Wednesday night gig at Pete Miller's Steakhouse in Evanston. It was at Miller's that he also first heard Chicago A-list musicians DENNIS CARROLL (bass) and GEORGE FLUDAS (drums) - who, seven years later, would fill the remaining slots in the Seán McCluskey Trio. After years of working on the Chicago jazz scene and lending his talents in a supportive role on five releases, McCluskey is happy to mark his place on the jazz map with THE BEGINNING. As Neil Tesser noted in the Chicago Reader, "...for all [McCluskey's] inventiveness, his playing consistently reaffirms core jazz values like ear-catching technique and narrative propulsion.' The Beginning is a welcome addition to the modern jazz canon from this "inventive" pianist.

Here's what you say about
Seán McCluskey - Beginning.