Elizabeth Fulgaro - One Nation Under God 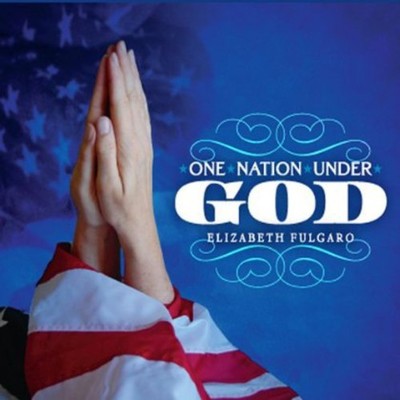 'Blessed is the nation whose God is the LORD.' (Psalm 33:12a NIV) ONE NATION UNDER GOD is a CD single - a new patriotic anthem for the times in which we live. On July 4, 1776 our forefathers took a stand, declaring intent despite all risks to become one nation under God. Every individual makes a difference. 9-11-01's heroes are our example. They chose to help others without regard for themselves. Let us never forget. Let us honor them. Let us keep stepping into the work God puts before us daily and He will weave our seemingly small individual efforts into a quilt which covers the world with His love and righteousness. God, bless America! ~ Elizabeth FUN FACTS + Here is the story of this song. Like many believers in Jesus Christ, I am a prayer warrior. In March 2011 I was praying for organizers of a 9-11-11 event. They knew I also listened for Holy Spirit inspired songs, which the Lord wanted composed. They asked me over coffee at a morning meeting if I had a song for 9-11-11. I did not. I asked the Lord, if He had a message He wanted released through song for 9-11-11. I waited for His response. Meanwhile, early that afternoon, the Holy Spirit nudged me that it was time to call and book the recording studio for a week in May 2011 to begin working on a new worship CD (which became GOD SEEKER released 10/2012). As usual, the Lord had not yet given me the new, original songs He wanted recorded, but was asking me to step out in faith and arrange for the recording of songs I did not yet have. As usual, I argued with Him for a few minutes, always knowing I am incompetent to the task but for Him and then obeyed to make the phone call. Within 5 minutes of hanging up after reserving the studio for the first week in May, the Lord gave me this song, 'One Nation Under God' as His message for 9-11-11. The song was downloaded in a single burst...and I knew recording of it was to begin in May. In fact, it was to be the first song we would start tracking. Imagine my amazement when on Sunday night May 1, 2011, the night before we were to begin recording, it was announced that Osama Bin Laden had been caught and killed......How intricately this man had been linked to the atrocities and horror of 9-11 attacks. Now this song was to be recorded directly following His death. God had foreknown it would be so. Why? Could it be that even though we could not forget and must defend ourselves against encroaching terrorism, that our Lord wanted the song instead to focus on the selflessness of 9-11's heroes and how each of them showed us how every person matters? + The flag featured on the CD was a gift from the California National Guard. It is special in another way, too, for it was flown over Camp Victory in Baghdad, Iraq on Memorial Day, 2010. God, bless our troops and let them know how grateful we are for them! + The cover photos were taken July 4, 2011 + The song first aired on radio on KYCC Stockton, CA on July 4, 2011 to declare that we intend once again to be one nation under God + The hero quilt on the interior of the CD jacket is made up of photos of over 100 different people, to illustrate that every person - *repeat* EVERY PERSON - matters, no matter their physical or mental condition. God created each of us of immeasurable value. And when we each simply are where the Lord wants us doing and being as He has made us to be, we make a difference for Him....It is together (as His Body) when we each do our part that our seemingly small efforts are as if woven into a 'quilt' covering the world with His righteousness and love.

Here's what you say about
Elizabeth Fulgaro - One Nation Under God.

1) One Nation Under God