Various Artists - When We Shine: Fifteen Songs About Pittsburgh / Various 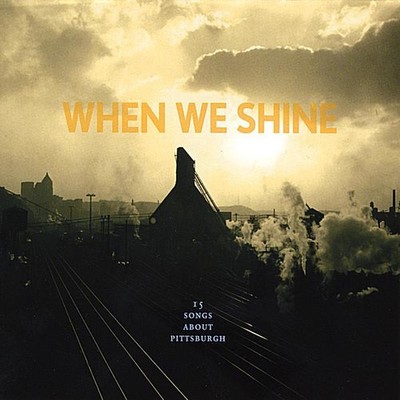 When we shine in this city, we really do shine - whether it's helping our country to win a war with manpower and steel, inventing the airbrake, curing polio or winning a sports championship. When the chips are down, this city always seems to rise to the challenge and brings out the best qualities that make Pittsburghers a unique, hardworking, humble, passionate, brilliant and compassionate people. The striking Clyde Hare photo, shot in 1952, which serves as the cover of the CD, reflects the spirit and content of most of the fifteen new songs in this collection about Pittsburgh, and seems to be an apt portrait of a city that turns 250 years old this year. In the foreground we can still see and embrace the artifacts of our mighty industrial past. In the horizon we see a glimpse of our city today and in the shining sky the promise of our future. Rick Malis: Eclectic singer-songwriter at ease writing and performing in traditional and modern folk, bluegrass, roots country rock and pop genres. Rick honky-tonks with Pittsburgh's favorite neo-traditional country and western swing band, The Mavens. His solo releases are collections of original tunes featuring tasty twang, sultry swing, bluesy bluegrass, and acoustic Americana. Sounding both fresh and classic it's a fusion of the Hard Travelin' Americana styles that Rick's been playing for the last twenty five years. His colorful lyrics and plaintive voice paint a wistful whimsical view of the world. If you're are a fan of John Prine, Roy Acuff, Hank Williams, or Bob Wills the music of Rick Malis will delight you. Tom Breiding: Tom Breiding is a Gateway to the Arts performing artist. His epic songs echo the voices resonating from the coalfields of West Virginia, the mills of industrial Pittsburgh, and the Main Streets of small-town America. His recent release The Unbroken Circle: Songs of the West Virginia Coalfields spent sixteen weeks in the top 100 on the AMA Chart, climbing as high as #55, and reached #18 on the RMR Folk Chart with more than 1100 reported spins in every corner of the U.S. Once a staff-writer at Nashville's famed Collins Music, Tom is a diverse musician who currently tours and performs as a member of three different bands and as a solo artist, has produced five albums for his independent label AmeriSon Records, conducts regular songwriting workshops, and has performed his material in venues from Times Square to Ventura Boulevard and in more than 100 schools in recent months.

Here's what you say about
Various Artists - When We Shine: Fifteen Songs About Pittsburgh / Various.